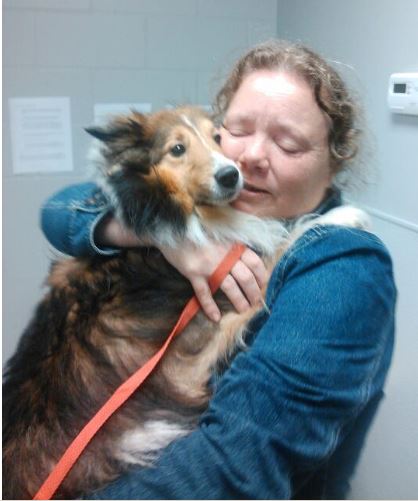 Sadie was found in a tree after Monday’s tornado that devastated Moore, OK.  She was taken to the Central Oklahoma Humane Society, where she got widespread attention after a photo of her looking forlorn was posted at Facebook, and people as far away as Texas and Michigan were prepared to foster the sweet, displaced sheltie  until her family could be found.

Sadie’s family saw the photo and called the shelter. Once shelter staffers had her name, they called out “Sadie” and she perked right up, helping to confirm her identity while the family member was still on the phone.

Kyrie Malmberg wrote this morning, “My mom got her dog back. She cried when they brought Sadie out. It was amazing see her reunited with her four legged companion.”

Kyrie says Sadie is very happy to be back with her family and has not left the mother’s side.