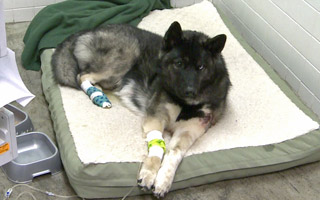 Last week Rex heroically protected his owners when an intruder came into their home. Rex was hit by a bullet and now thanks to the kindness of strangers Rex is getting the surgery he needs.

On May 17th two men broke into the home of Steve and Janet Erlewine in Omaha and terrorized them. That’s when their dog Rex came running to the rescue.

“Here comes these two African-American guys, all I could see was their eyes, had their heads wrapped up,” said Steve Erlewine. “The dog came running in and they shot him and I stood in front of him and I said please don’t shoot my dog.”

The men continued to terrorize the family, threatening to kill them if they didn’t shut up and stay put. The two men rummaged through the family’s belongings but ended up taking nothing.

Rex sustained a serious injury from the gunshot and was in need of surgery. The Nebraska group Hearts United For Animals came to his aid and paid for his surgery and medical expenses.

“It’s been very kind of people,” said veterinarian Ellis Jensen. “Everybody is thinking of him as a hero because he is. It’s unfortunate he got shot because of his efforts but we’re going to try to keep his leg and have it heal.”

Rex will be in recovery for at least six to eight weeks. Hearts United For Animals is offering a $5,000 reward for information that leads to the arrest of the two men responsible for terrorizing the Erlewines and shooting Rex.