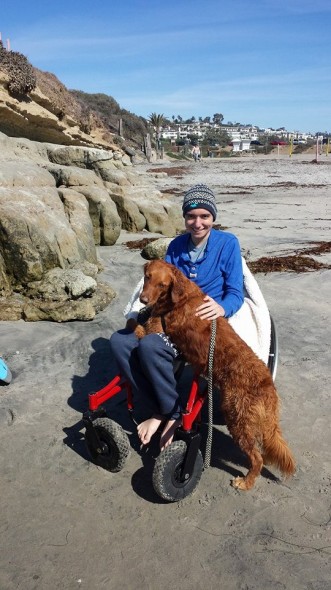 Caleb Acosta has been in a tough battle with brain cancer. When the Make-a-Wish Foundation asked him what he wanted the 15-year-old told them he wanted to surf with Surf Dog Ricochet. This week his wish came true and for once the teen had a happy day that was worry-free.

Caleb has endured more than most people have. Last summer Caleb started having constant headaches, after going to a doctor he and his family were informed he had Stage 4 brain cancer. Doctors say most patients don’t survive more than one year with the terminal disease. He has had brain surgery, radiation, chemotherapy, but the tumor only came back and this time spread to his spine. He isn’t giving up though and continues to fight and receive treatment.

When the Make-A-Wish Foundation offered to grant him a wish he told them about a dog he had seen on ESPN that surfs with disabled children. Ricochet is a Golden Retriever in San Diego that has become famous for her surfing and charitable work. She is a registered and certified therapy dog that surfs with special needs kids as well as people with disabilities and wounded warriors.

All Caleb wanted to do was to have a chance to surf with Ricochet and experience her therapy. His aunt had shown him the ESPN segment on her and he instantly was inspired.

“It really made me so happy to be like, o that’s so cool, I want to surf,” said Caleb.

Caleb made the trip to Del Mar Dog Beach to have his wish granted this week. On Wednesday he got out of his wheelchair and onto a surfboard with Ricochet and for the first time in a while Caleb was pain free and happy.

“No words can describe the pain that we feel watching your child go through pain and having to take medication. You know, he was healthy just six months ago,” said Caleb’s mother Cathy Franco. “When he’s under water, he doesn’t feel pain. He doesn’t feel pressure in his head.”

With Ricochet helping to control the board Caleb was given the opportunity to feel like a normal kid again.

“It felt really good to be free, just to be not worrying about anything, having someone to be my balance,” Caleb said of the experience. “I felt almost normal again. Finally.”

To follow Caleb in his fight against cancer go to the PrayforCaleb Facebook page. Surf Dog Ricochet and all her charitable work can also be followed on her Facebook page.