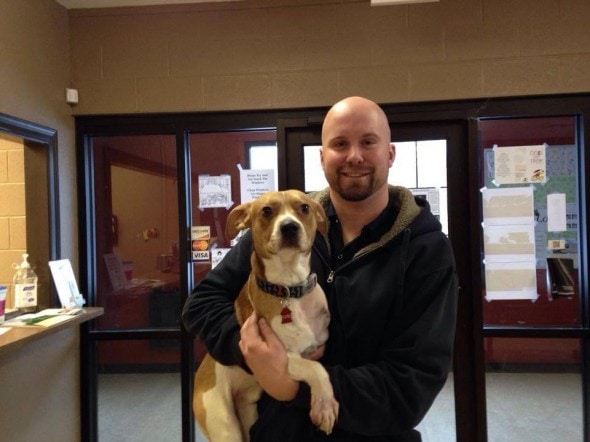 On January 22nd T-Peg was found on the side of the road in Marion, Indiana in freezing temperatures. His left paw was stuck to the ground and would have to be amputated because of frostbite, but now the stray dog has a loving home.

A woman found T-Peg along the side of the road and he needed help quickly. His left front paw was stuck to the ground and suffering from frostbite. He also had frostbite in his other front paw, but that is beginning to show signs of recovery. Animal Care & Control believe that T-Peg may have been on the side of the road for as long as seven days.

Animal Care & Control began posting about T-Peg on their Facebook page to make people aware of the dangers of leaving dogs outside in the cold temperatures, but the posts also helped T-Peg find a home. Ryan Ferrell knew right away when he saw T-Peg’s story that he wanted to give him a home. He visited T-Peg everyday until he could adopt him and bring him home.

On January 29th, T-Peg went home with Ferrell and is settling in well to his new life. Ferrell has created a Facebook page for T-Peg to keep people updated on his recovery and help inform people about the importance of bringing your dog inside in cold weather.

“Hopefully we can live happily ever after and teach people to take their dogs in when it’s cold out,” said Ferrell. “Luckily he’s here ‘cause he easily could’ve died out there. We’ll never know how many do because (you) don’t hear about that.”