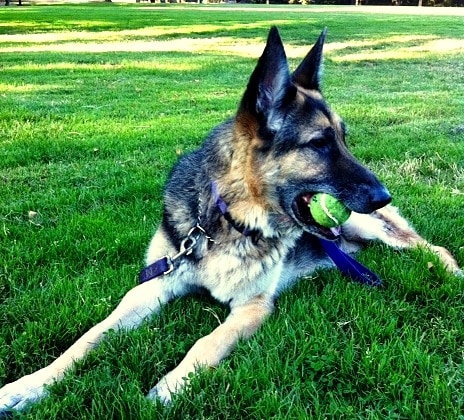 I needed a buddy for my dog so I went to German Shepherd Rescue in LA. We picked a handsome, eight-month-old shepherd who loved any attention you gave him. GSR said they were sure he had been dumped by a breeder in the area. I couldn’t figure out why a breeder would dump what was obviously a pure-bred shepherd, but found out quickly enough.

We went on our first walk, made it less than a block before he lay down. This repeated itself the next few days. A trip to the vet let me know what the breeder obviously had known – at eight months old this poor puppy had virtually no hips. By this time I had fallen in love with the goofy, attention-loving dog, so decided we would rebuild him. Two new hips for an eight-month old dog led to a name change, he became RoboDog!

He repaid me in full less than two years later – a would-be burglar tried to come in my house through the back gate at 2 am. Robo heard the gate opening and before the guy got into the yard, Robo was out of the house with that deep-throated bark ready to attack. This wasn’t a ‘there’s a raccoon in the yard’ type bark so I ran outside and caught a glimpse of someone running up the driveway.

I called the police, not because I was afraid, but just to let them know someone was in the neighborhood. They responded quickly and were greeted by a still-agitated Robo. They laughed when I told them I wasn’t worried and said no reason to be – I had the best protection possible.

Rescues may need a bit more support medically or emotionally but you end up with the most loyal friend you could ever ask for. Robo is still playing at a great old age of 13!

From the Animal Rescue Site, which shares heartwarming stories and sells all sorts of pet-related products – from t-shirts and jewelry to kitchenware and garden decor.