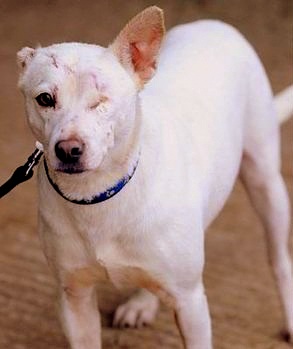 Many street dogs in Romania are badly injured by brutal locals, and Ralph was no exception. He was maliciously attacked with acid, but now his days of horror are over – he has been transported from Bucharest to Britain, where he will spend the rest of his life being cared for and adored.

Ralph spent his life foraging the streets of Bucharest, eating rats and whatever else he could find. Being a street dog anywhere is difficult, but especially in areas where people not only wish they weren’t there, but go out of their way to make that happen.

The white mix breed lost an ear and part of his eye in an acid attack. But his life of torment was soon to change, as he was flown to London by UK-based rescue group K-9 Angels. This charity specializes in rescuing dogs from foreign countries and finding adoptive families for them in the UK.

Ursula Dalton from Darwen, Lancashire adopted the sweet boy and brought him home to her husband John, their six-year-old son Jack, and their two other rescue dogs, Ella from Greece, and Ted from Manchester.

“I was following the K-9 Angels website and I noticed all the cute, cuddly ones were being selected, but he was being overlooked, so I decided I would have him,” Ursula explained. “He lived on a diet of mainly rats and rubbish, but here he’s living on a diet of Pedigree Chum, and his life is totally different to in Romania.”

Once in the UK, Ralph had surgery to remove his injured eye, which immediately improved his quality of life.

Ursula says that although customers at her riding center, Moorview Equestrian Centre, are taken aback at first glance, they quickly change their tune when they discover how affable he is.

“At first they’re a bit shocked to see him because he looks so unusual, but then they see he’s so friendly that they like him,” she said. “You don’t see many with one eye and one ear, but… he’s a really happy dog and has a really friendly temperament.” 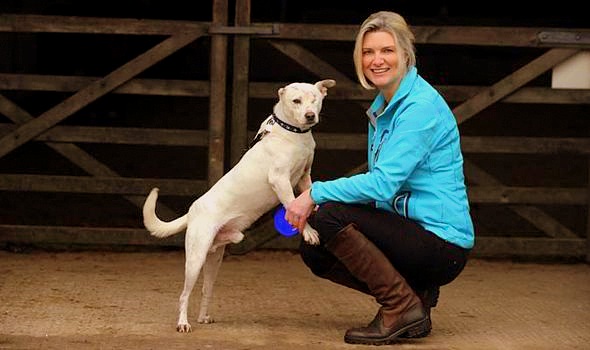