An officer less than two weeks into the job is already considering resigning from his position based on the disturbing practices he says his fellow officers have.  Jermaine Downs turned in two officers after they bragged about shooting and beating stray animals while they were on duty.

At least two officers from the Konawa Police Department in Oklahoma have been placed on administrative leave after Down made allegations against them.  The reserve officer heard the pair boasting about how they killed stray dogs.

“I looked inside the back of their patrol car and I noticed a small white dog,” Down told News 9.

He believes the dog was taken out of city limits and shot to death.  Down says the two talked about other strays they’ve killed, and that one described holding a dog down with his left hand and shooting it with his right.

A week later, Down watched the same two officers corner a raccoon and shoot it several times.

“The animal wasn’t deceased, so they immediately – both of them – brought out their batons and hit it repeatedly until they were certain that it was dead,” Down explained.  “After they had done that, one of the officers had remarked that he had hit it so hard, he caused a bend in his baton.” 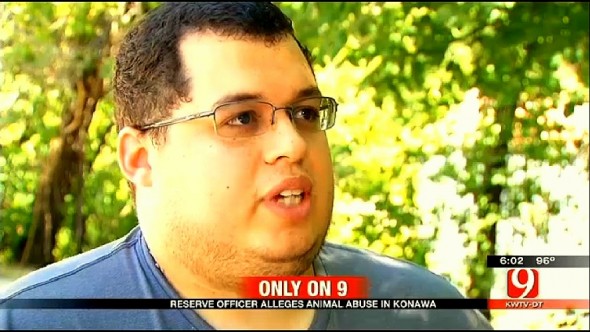 Police Chief Richard Finch is singing a different tune, and said, “The raccoon never turned on the officers.”  But he wasn’t there to witness the incident.

“I never saw the raccoon charge the officers,” Down stated.

Finch claims that none of his officers have shot stray animals they find, and notes that some stray dogs have even been adopted by officers and other city employees.  While that may be true, and if so is admirable, it does not disprove the cruelty claims made by Down.

If this the kind of behavior he can expect to see from his fellow officers, and to just have it swept under the rug by higher-ups, Down does not wish to keep company with such despicable people.

“Me knowing about it and not doing anything is allowing it to happen, and I can’t be a party to that,” he declared.

The chief has said that when the allegations were made, both officers were immediately pulled from duty and put on administrative leave.  However, Konawa City Manager Tony Lowery has decided to allow them to work while they are being investigated by the Oklahoma State Bureau of Investigation.