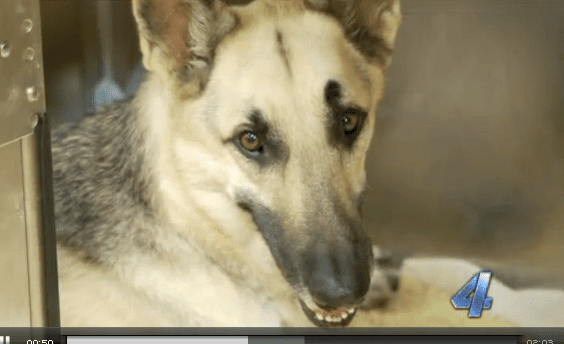 In early December a german shepherd was thrown off a bridge into oncoming traffic on Interstate 40 in Oklahoma and somehow managed to avoid getting hit by a car before being rescued.  Now it seems he fell right into the open arms of his new family.  The dog, who is named Rookie, is being adopted by the Oklahoma Highway Patrol trooper who found him.

Rookie did suffer a badly broken leg and sustained some other injuries in the fall, but he was lucky to get out alive.  He was sent to Oklahoma State University Veterinary College Teaching Hospital where he had surgery to repair the shattered leg on December 10th.  Police are still searching for his owner who may have been involved in the incident.

A family claiming to have owned Rookie up until a few months ago have spoken up, saying that they loved him but he was too much for their family of five and so they returned him to his original owner. Says Paul Baez, “I just can’t believe someone would do something like that to him because he’s not in any way, shape or form an angry or mean dog,” adding “He’ll continuously play with you, continuously jumping, continuously just wanting to be with you and loved, more than anything, just loved.”  His original owner who now lives in Oregon says she gave the dog to another family.

The Humane Society is going to pay for the cost of Rookie’s treatment and initially a reward of $2500 was being offered for information leading to the arrest and conviction of the person or persons responsible for this heinous act.  Oklahoma County Sheriff John Whetsel said throwing Rookie off the bridge was “unconscionable and the sign of an inherently evil person.”  Thanks to several large donations the reward is now up to $7500.

Jennifer Fisher, the trooper who found him and took him to the veterinarian, was so moved by his courage that she and her family decided to adopt him.  So, for Rookie this story will have a very happy ending with a new home for the holidays where he will get all the love and attention he so deserves.

Anyone with information on this crime should call the Oklahoma County Sheriff’s Office (405) 869-2501.