A dog found abandoned and left for dead has been described by a vet as the “thinnest she had ever seen alive”. The Staffordshire cross, believed to be one to two years old, weighed just 8kg – half her expected healthy weight – and was too weak to walk or eat when she was found.

The female dog, handed into an RSPCA centre in Weston-super-Mare, Somerset, has been named Hope by staff. 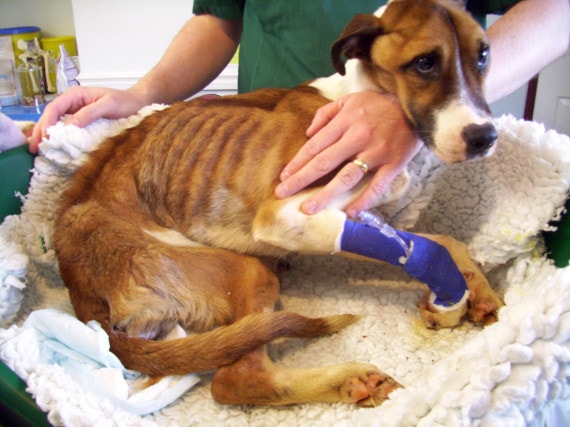 Vet Anna Parry, who is caring for the dog, at Bridge Veterinary Practice, said: “I spent eight years working at an RSPCA clinic in the past so I am no stranger to abused and neglected animal but this is the thinnest dog I have ever seen still alive.”She weighs in at just eight kilos and a healthy weight for her would be more like 16.

“When she first arrived we had to wrap her in blankets and bubble wrap just to keep her warm as she could not maintain her temperature and although she is now off the drip and much more responsive she still has a long way to go.”

The RSPCA said they were alerted to the case when a man turned up with the emaciated dog, which he said he found in a cardboard box in a layby near a burger van at the side of the A370 near Hewish on May 16.

The man, who gave his name only as Ben, said he had seen the dog and taken it straight to the RSPCA, from where it was rushed to Clarendon Vets. 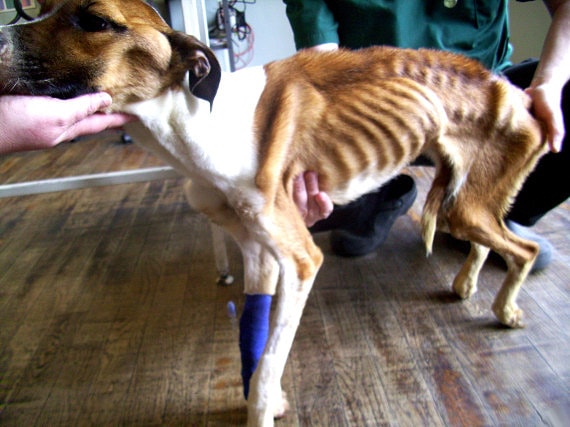 Nurses at the vets took it in turns to look after the animal throughout the night. Hope spent several days being drip fed and is now able to hold up her head and is slowly starting to eat and drink for herself, the RSPCA said.

RSPCA inspector John Norman, who will be investigating, said: “This poor creature was found in a terrible state, and it would seem that whoever allowed her to get like this simply tried to get rid of the problem by abandoning her as though she was rubbish.

“I would urge anyone with information about this dog to contact the RSPCA cruelty and information line so we can find whoever is responsible and ensure there are not other animals in their possession in need or help.”

Under the Animal Welfare Act 2006 anyone found guilty of causing unnecessary suffering to an animal can face up to six months in prison and/or a £20,000 fine. Anyone with information about the dog is urged to contact the RSPCA cruelty and information line at 0300 1234 999 and leave a message for inspector Norman.

When Hope is well enough, she will be transferred to the RSPCA North Somerset Branch Brent Knoll Animal Centre.