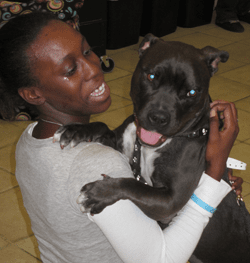 The moment was captured on video when Ryder shared an emotional reunion with her owner at the Arizona Humane Society on November 26.

Ryder was at the center of an abuse case after she was taken from her owner by the abuser and then mistreated, but now she is healed and back at home.

Ryder’s case was the subject of many questions from the community, so the Phoenix Police department issued a statement that explains the basics of the case and the developments that led to her being released back to her owner.

Many will remember the sad story of Ryder, the pit bull dog that was found by Phoenix Police abused and neglected on September 28th, 2013. Ryder was turned over to the Arizona Humane Society (AHS) for treatment. Due to the professional and special care of the staff at AHS, not only has Ryder’s health vastly improved, she has thrived and has become the darling of supporters and citizens worldwide.

After Ryder’s story became the subject of a media blitz here in the Valley, her owner contacted AHS and revealed that Ryder had been taken by an acquaintance. The owner was expecting her pet to be returned but the police investigation showed a third person, the eventual suspect who was arrested for the abuse, had taken Ryder. Phoenix Police detectives were able to establish ownership based on photos and we have been working with the owner as the abuse case moves forward for prosecution.

On Tuesday November 26th, 2013, after weeks of care and well wishes from hundreds, Ryder was reunited with her owner. The reunion was quite emotional for the owner, AHS employees and, based on her reaction to seeing and recognizing her owner, also for Ryder! Alas, there was not enough tissue to go around.

The investigation is continuing. We hope the best for Ryder and we know she is where she belongs, back home! Thanks to all who shared in Ryder’s story. The Phoenix Police Department places great value in our relationship with the Arizona Human Society as we move to protect the pets in our lives, and the relationship with our citizens who support those efforts.