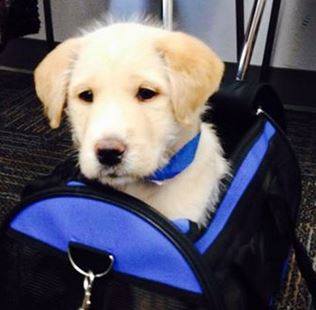 A week after being rescued from a storm drain in Dallas, a puppy named Stormy has a new loving home. Over twenty people lined up outside the Dallas Animal Services shelter on Sunday to get a chance to adopt the puppy and his two siblings.

After spending weeks in a storm drain, Stormy was finally rescued. His parents and siblings were later rescued from the same area and on Sunday Stormy and his two siblings Sampson and Sadie were ready to find their forever homes.

A lottery system was used as around two dozen people were waiting outside Dallas Animal Services on Sunday morning for a chance to give the puppies a home.

Donna and Mike Carruthers were the lucky ones selected to adopt Stormy. The Carruthers have a three acre fenced in yard for Stormy to run around and play in, along with several grandchildren who will be excited to play with the young puppy.

“We’ve been looking for a dog for a couple years and just hadn’t found the right one,” said Mike Carruthers.

When they saw the news story about Stormy though they knew he was meant to be their dog.

Sadie and Sampson also found great homes and their new families were excited to be taking them home.

Some of the people who were not selected to take home one of the three puppies still went home happy though as they adopted other dogs at the shelter.

The puppies’ parents are still at Dallas Animal Services, after living on the streets for several years they will need to be socialized and will take some more time to be placed in the right home.