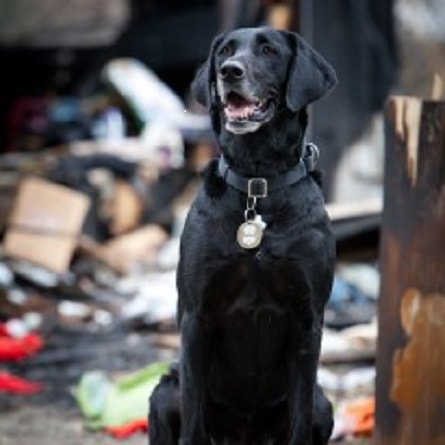 There is only one arson investigation dog in the whole of the San Antonio, Texas Fire Department.  Kai, is a 6-year-old black Lab, and has been named a finalist in the American Humane Association (AHA) “Hero Dog Award.”

Kai has beat out over a dozen other dogs from all across America also nominated for this prestigious award.  As a finalist, Kai’s chosen charity which is Project Paws Alive has received a $1,500 donation in Kai’s name.

Kai will be on her way out to Hollywood, California this September with the other finalist.  There will be a special Hero Dog Awards ceremony held, and if Kai is selected, there will be another $5,000 donation made to Project Paws Alive.

Kai was once a rescue dog, picked up at a local pound and so far has done some very good work for the San Antonio Fire Department, investigating arson and often finding the clues that us humans just would not be able to properly detect.

In an article back in 2012, on KSAT 12 News’ website, a video was posted introducing the world to Kai.  Kai’s name is actually a Scottish word in a very old dialect for “fire.”  Kai and her handler, arson investigator Justin Davis can be seen in the KSEN 5 News video below.

Kai both lives and works with Davis full time.  The two are a team, and completely inseparable.

“Her badge number is my badge number,” said Davis in that 2012 interview.  “We’re like one and the same.”

A vote can be made by everyone, once daily by clicking here.  Voting goes until September 15th, 2014.  Good luck Kai!  And good luck to all of the finalist in this year’s Hero Dog Award!