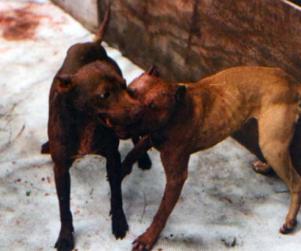 Three people have been arrested in connection to a dog-fighting ring in San Francisco. One of the men had been arrested on an unrelated charge, but when police searched his cell phone, they found video of a dog fight and faces of people involved, leading to further arrests and charges.

The fight is believed to have taken place in the Hunters View public housing development. The video showed two pit bulls forced to fight, with their owners and backers provoking them to fight harder.

“They’re kinda slapped and punched and yelled at and set back at each other and they fought pretty viciously for about five minutes until the video cuts off,” said San Francisco Police Inspector Dan Silver.

Three documented members of the Westmob gang were arrested.

The arrested are Ed Perkins and Acie Lee Mathews Jr., who were the owners of the fighting dogs, and Jermaine Jackson, who was a spectator of the fight, which is also a crime. A search of Jackson’s home was conducted, and a mother pit bull and her three puppies were rescued. A bulletproof vest and ammunition were also discovered.

Other videos were found on the cell phone that showed pit bulls being trained to bite by attacking hanging tires.

Police believe one of the dogs involved in the fight may have died, but they would like to find them. They are also searching for other spectators, who can be see in the video. Anyone who recognizes them should contact the SFPD’s tip line at 415-575-4444. The Humane Society offers a reward for information leading to the arrest and conviction of anyone who participates in dog-fighting, and ask people to call 877-TIP-HSUS (877-847-4787).

– A black woman between 20 and 28 years old who was wearing a red shirt, gray sweatpants, and white tennis shoes.

– A heavyset black male wearing jeans and a black long-sleeved T-shirt with graphics on the front.

– Another male of Pacific Islander descent wearing a camouflage jacket with dark pants.

To see some of the images captured of the spectators, please visit here.