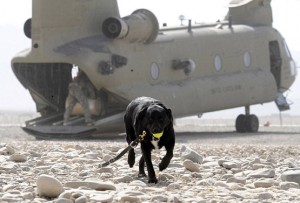 Sarbi was awarded the Purple Cross by The National President of RSPCA Australia, Mrs Lynne Bradshaw. “It recognizes the deeds of animals that have shown outstanding service to humans, particularly if they’ve shown exceptional courage,” Mrs Bradshaw said. “I think there’s no doubt that Sarbi has shown an incredible resilience and strength that should be recognized.”

Chief of Army, Lieutenant General Ken Gillespie AC, DSC, CSM, also attended the ceremony. “I am very proud of the professional and dedicated work of our combat engineers and dog handlers, and the vital role they play in keeping our soldiers safe on deployment,” said Gillespie. “I am thrilled that the RSPCA has chosen to honour Sarbi, and by extension, all of Army’s working dogs and their handlers with this award.”

Sarbi went missing in Afghanistan in September 2008 following Coalition contact with Insurgents. During the engagement, nine Australian soldiers, including Sarbi’s handler, were wounded. Sarbi was returned to Tarin Kot in October 2009, after being missing in action for 13 months.