In September of 2011 I went on a family roadtrip to Utah. My boyfriend at the time and I stopped at a gas station in Nephi, Utah, and while he went to the restroom I pumped gas, and as I was killing time waiting, I spotted a horrifically thin dog slinking from pump to pump. He would approach customers pumping gas, and they would shoo him in fear.

He was gaunt and had sores and lesions all over his body, but he was absolutely beautiful. I knew right away that he was a purebred German Shorthaired Pointer, and he was small, so I figured he was young. He had a beautiful chocolate head, and liver ticking scattered across his dirtied white coat. 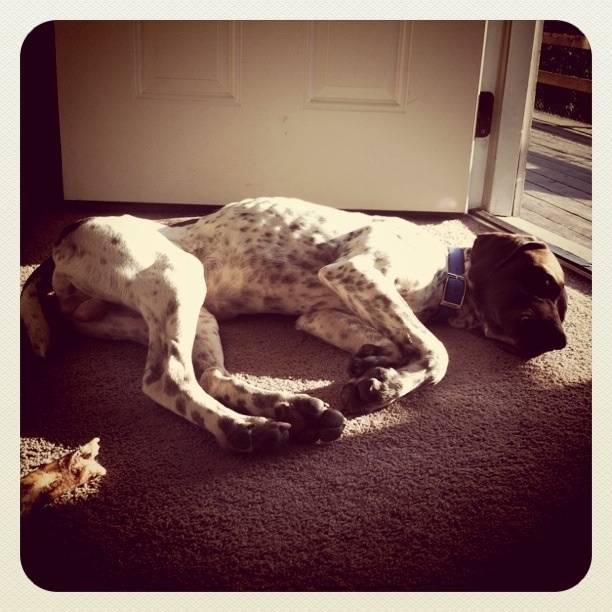 My boyfriend returned from the restroom, and I asked him if he could buy a sandwich while I attempted to coax the dog over to me. The dog looked at me with wary eyes, but the smell of ham sandwich did the trick. When he finally reached me I felt a spike of fear in my gut.

This dog looked extremely sickly – perhaps he had rabies, but when he came close enough to bite, he just sat instead. He looked up at me with eyes I will never forget. Just typing this story brings me back to that moment, and I can feel the tears well in my eyes. I dropped slabs of ham into his mouth, and he took the food so gently, despite his obvious state of hunger.

He ate the sandwich in mere seconds, and gulped down an entire bowl of water. I then decided to examine him, since he had not shown any signs of aggression thus far. I made a choice that most would advise against: I sat on the filthy cement at a roadside gas station, to perform a routine physical exam, on a dog I had met 10 minutes ago.

I had once volunteered as a veterinary technician’s assistant, so I knew how to check his vitals. My heart raced as I gently restrained the skeletal dog. I ran my hands over his entire body checking for parasites, examined his sores and gashes, and checked his gums, teeth and vitals. His gums were pale, but his teeth were pristine, which told me he was young. He was intact but not fully developed, which confirmed my assumption. My guess was 8 months.

His tail was docked, single dew claw was removed, and the other was hanging by a mangled string of tissue. He had infected scabs on his face, rear and legs, and he trembled as I ran my hands over his ears. Those eyes…they were the color of amber in summer sunlight. I began to choke up as I realized this poor puppy had been here for a very long time. Countless people had stopped at this station, yet no one had paid him any attention.

As I released my hold on him he slumped into my lap, his long body stretched all the way across my intertwined legs, and he released a deep sigh as he closed his eyes. I looked up at my boyfriend with tears in my eyes and we called the SPCA. Within ten minutes a woman arrived with an animal control truck, and took the emaciated dog away. As I handed him off, she told me I was a wonderful person for helping him, but all I could think of was what would happen to him next. 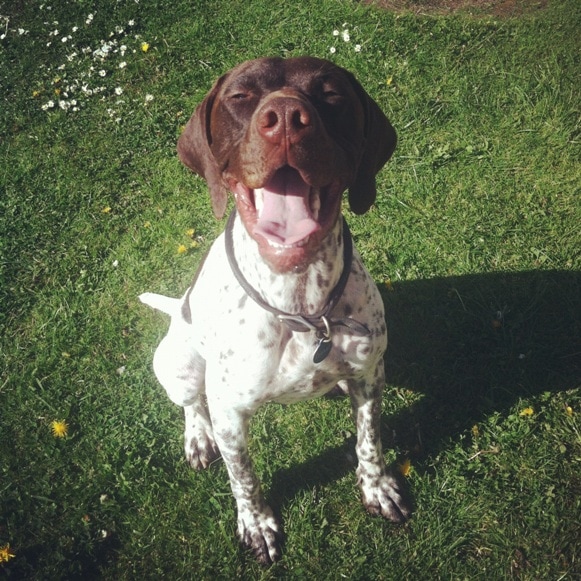 We told the woman to call us when someone claimed him, but a tone of doubt hung heavy in her voice. She told me that the shelter was at capacity, and if no one claimed him in a week, he would be euthanized. My boyfriend and I called every day from that day forward, and at the end of the week, no one had claimed him. No one had even visited the shelter, and upon our trip to the facility, we understood why.

The woman who took the dog away, was the only person who worked in a shelter that housed over 30 dogs. The kennels were drowning in feces and urine, and the stench was so potent, it burned our eyes. It wasn’t her fault. She apologized for the filth, and explained that no one ever comes for the dogs, no one ever volunteers to help, and that the majority of these dogs would die in this shelter. There were beautiful dogs everywhere, and the sight of several of them crammed into runs fit for a single dog was heart wrenching.

We wanted to take them all, but couldn’t even justify taking this dog home. Against our better judgment, we adopted the dog for a whopping $20 (and donated another $30). No paperwork, no questions asked, just $20 and this beautiful dog was ours. We decided to name him Diesel, since we had found him at a gas station.

Getting him into a car was a mission in itself. He was horrified of it. I feared that he would panic once the car started to move, but to my surprise, he laid his head on my lap and slept the ENTIRE ride. For 8 hours I pondered our decision. I lived in a “no pets allowed” tiny studio apartment in a quiet neighborhood. He was a bird dog, a breed notorious for high energy and a zest for adventure.

We decided to just foster him until we could find him an appropriate home. The first night was spent posting an ad on craigslist, and replying to potential owners. Within two days I had over 25 responses to my post, and many of them sounded wonderful, but every time I looked into Diesel’s eyes I felt as if he was my own. 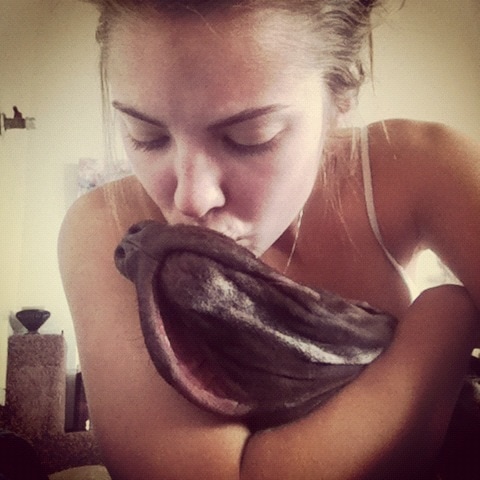 I found excuse after excuse to not meet with the inquiring potential owners, and I eventually deleted the post all together. My boyfriend had posted fliers everywhere, and calls continued to pour in. I finally told him I couldn’t let Diesel go, and I began to look for a new place to live. I left my beautiful studio apartment in the woods, moved in with my boyfriend, had to commute 30 minutes to school and work everyday, and when the relationship failed, I took Diesel back home with me (6.5 hours away).

It has almost been a year since I found Diesel, and with every passing day I watch him grow stronger. He was 35 lbs when I found him, he is 55 lbs now, and when he fully fills out, he will be about 65 lbs. His wounds have healed, but some of the deeper ones have left scars. His coat is brilliant, soft and exceptionally beautiful. He is well muscled and runs 10 miles a day, with the biggest grin you have ever seen stretched across his face. He has come on many roadtrips since I found him, and he considers the car his first home.

I have 1 semester of college left, and raising a high energy puppy while balancing school and work has been anything but easy, but I wouldn’t take back a single day. I hope that my story inspires people to stop when they see a dog in need, or for that matter any creature in need – because they could change your life in ways you would never imagine.