Nacho was rescued by Marley’s Mutts after being found tied with a heavy chain in an abandoned lot and showing numerous open wounds in Bakersfield, California on August 20. Two short weeks later, he is already leaving his abuse far behind him as he begins a new and better life.

Marley’s Mutts rescued Nacho after he was found by a County employee chained to a fence and badly injured, possibly mauled. Authorities and his rescuers don’t know who did it or why he was left like that, only that he was. His rescuers have offered a reward to catch the person who left Nacho in such a state, but their primary focus is on Nacho and their efforts to make him happy and whole, and to prepare him for a good new life.

His rescuers write that their primary goal is to : “focus on the positive: watching our boy heal and watch with amazement as a community comes together over his struggle. He will get better, he will rehabilitate and he will know a future that is bright, happy, triumphant and glorious. ”

Nacho had surgery to repair about a dozen lacerations, mostly to his face and legs. He had his wounds treated and stitched up, then returned to his rescuers and went into foster care.

Nacho’s adoption profile says he is a 2 year old pitbull mix who hasn’t yet been around kids, other dogs or other animals. but is housebroken, crate trained, and comes when called. Nacho is still recovering from his wounds and his experience as an abused and neglected dog but is expected to be ready to find a good new home before long.

“This big boy, and still putting on weight from being under nourished, is a lovable fella. Even with his stitches and wounds healing, he has energy to play and learn. After one week, he is learning to be calm around food with his consistent commands. He is still learning other simple commands, but is showing progress with those as well. He has not been on leashed walks, yet, due to the recovery process. He has no aggressions toward any gender of people and seems to be a “man’s kind of dog”. He has not been exposed to other pets, but does show heighten curiosity to cat noises and has barked aggressively at one large dog passing by his foster home’s property, but has not shown aggression towards other dogs at the vet while on a leash. He is comfortable in his kennel with the door closed for overnight and an empty house for two or three hours at a time. He lies in it, on his own with door left open, as well.” 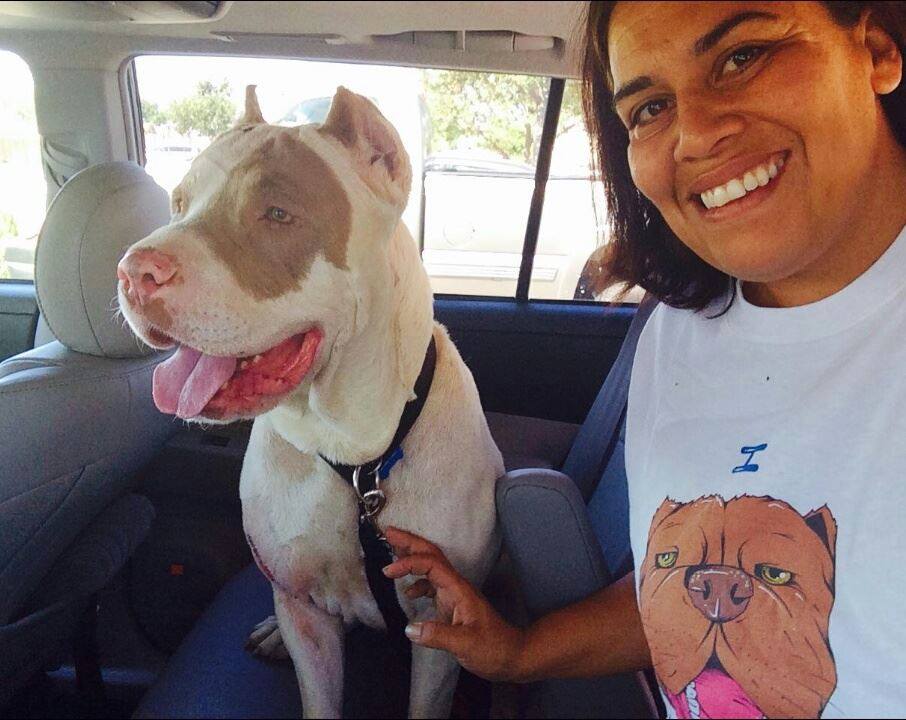 
Nacho is making a great recovery, and Marley’s Mutt’s posted the following update at Facebook on September 2:

Nacho had a check up today to ensure his wounds are healing properly. He has a wicked bump on the top of his head that was drained. He is going to continue his course of antibiotics as we wait for his shoulder to heal. The positioning of it makes it a slow process since it is constantly moving with every step but there has been major progress.

Nacho is learning so fast and is just as loving as the day I met him. Every time I see him he looks so much better. Being there when Zach originally picked him up makes it hard to believe this is the same dog, he was so messed up. I always try to find the positive in each situation but I admit in the moments when I first saw him I was shaken. He was covered in blood with flaps of skin exposing muscle and fat. I was devastated to see him in so much pain. I knew he would get better but it was still a hard pill to swallow.

I look at him now and see him almost completely healed. He is so beautiful, so happy and so amazingly loving. It is hard not to cry when I think about the transformation he is experiencing. No longer broken, no longer in pain, he is finally able to be a dog.

Honestly, I hope the “owners” that left him chained to that fence see this. You threw away a good dog, you threw away Nacho. Now you will never experience what we are experiencing. You will never know his love like we know it because you never loved him like we love him. You lost out on an awesome boy and I for one am glad.

He will always know love and happiness now with us, he will never know a dark day again. We will find him the best home ever with the best family ever who will treat him like a son and not something that is easily discarded as you did. Nacho is going to live the best life ever and be spoiled rotten, I will personally make sure of that. We are going to give this boy so many awesome experiences that he won’t even have time to remember you. – Jackie
.
See Nacho at the time of his rescue. Please be cautioned that he has several open and as-yet untreated wounds:
(You may wish to give this a miss if you do not want to see Nacho “before.”)

Here is Marley just three days after his rescue:

.
.
Marley’s Mutts is offering a $1,000 reward for information leading to the arrest and prosecution of the person or persons responsible for the harm Nacho suffered.