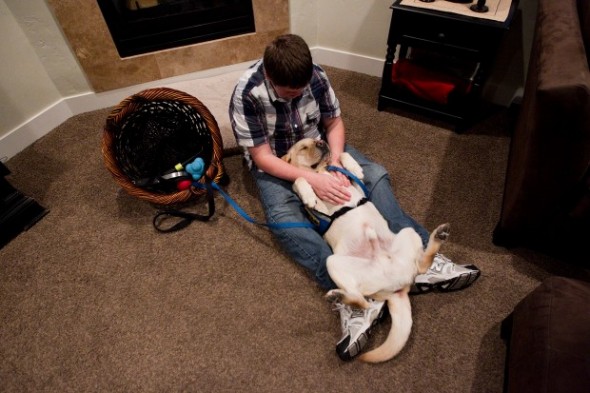 Sawyer Hamilton’s life has been changed immeasurably by the presence of dogs.  Sawyer was diagnosed with autism when he was young and until he got his first service dog it seemed he would never live a normal life.  Then along came Hal, and then Topper, and there is no stopping him now.

Sawyer’s mom Kandace said “We knew something was up when he was little,” recalling that Sawyer didn’t interact and didn’t play with toys the way other children did. He had no sense of danger, almost going over the edge of Bryce Canyon when he was young.  After his diagnosis, and his parents awareness that he seemed to connect well with animals, they looked into getting him a service dog.

Eventually they found Canine Companions for Independence, a nonprofit company in California and were able to get Sawyer just what he needed.  His first dog was named Hal, and they quickly became inseparable, a vital and integral part of Sawyer’s life.  Hal helped with Sawyer’s sensory needs, and suddenly the young boy was able to sleep through the night.  Having to take care of Hal, who he loved very much, gave him responsibilities that helped “pull him out of his own little world,” Kandace said.

“Most of all,” Kandace explained, “it is just an unconditional friend and a companion. Because a lot of time when you get to Sawyer’s age, in junior high, kids aren’t nice.”  The Hamilton’s were so encouraged and impressed that they became volunteers and began to raise puppies for CCI.  Then tragedy struck last year when Hal died suddenly and without warning, and Sawyer started to regress.

Fortunately the Hamilton’s applied for and were granted a second service service dog from CCI and last fall Topper, a yellow lab, became a part of Sawyer’s life.  Since getting Topper, he has improved immensely and even got his first 4.0 grade point average on his report card.  “Sawyer can do the things he wants to now,” she said, “and he’s been able to move forward and onward and upward.” She said he plans to go to college. “I think he’s going to surprise everybody.”

Says Sawyer “after Hal died, I thought nothing would ever go good again,” Sawyer said, “but now it has and it will probably just get better from this point, especially with Topper by my side.”  The Hamilton’s are currently raising their 5th puppy who will go on to “college” to become a service dog for another lucky soul.