Schoep became an internet sensation last year when a picture of him being cradled by his owner John Unger as the two waded in Lake Superior went viral. Donations came pouring in for the ailing dog, who suffers from arthritis. Schoep’s condition is stable and on Saturday he celebrated his 20th birthday, once again the love and support came pouring in from animal lovers all over.

Last July, photographer Hannah Hudson snapped the now famous picture of Schoep and Unger. She posted the picture on her Facebook page and within four days it had been seen by millions. Schoep is arthritic, blind and hard of hearing and Unger had been using the water of Lake Superior to help soothe his arthritis. Soon donations and well wishes came flooding in to help make life more comfortable for the ailing dog.

On Saturday Schoep turned 20, and once again animal lovers came through with an outpouring of support and love. Schoep received over 1,000 cards for the big day and several gifts as well. A “happy birthday” post on Schoep and John’s Facebook page received over 30,000 likes in less than six hours.

The support and love that has been continuously pouring has helped give Schoep and Unger another year together that they may not have had otherwise. They celebrated that year in pretty low key fashion, a good walk and a special meal. 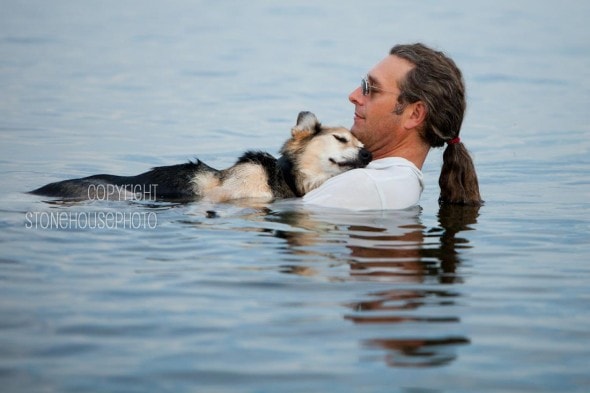