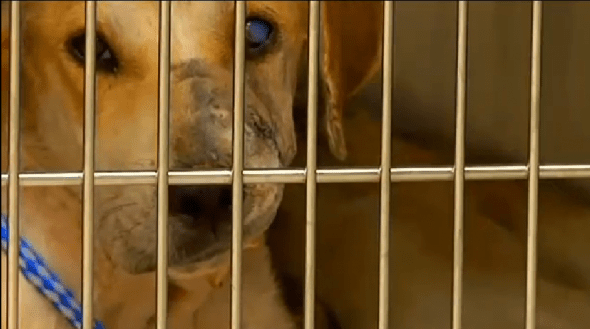 When All 4 Paws came to the rescue of Mackenzie they had no idea the kind of abuse she had endured. As they treated her the seriousness of her abuse came to light and now the rescue is determined to do something to help change animal abuse laws.

Mackenzie was dropped off at her local shelter by her owner who said she had been bitten by a snake. The shelter believed the owner had tried to cut the infection off of her face using a pocketknife. The shelter was going to put her down because of her injuries unless someone came to help her. All 4 Paws saw a Facebook post about her and drove several hours to save her.

It wasn’t until All 4 Paws started treating her injuries did they realize just how badly she had been abused.

“We started treating her as if she had a snake bite, but as we got deeper into her care, we realized it was much more involved than that,” said Noel Berger, who lead Mackenzie’s surgery at the Animal Hospital and Laser Center of South Carolina.

While performing surgery Berger realized Mackenzie had a fractured jaw, which prompted him to take some x-rays.

“Then we realized the unthinkable,” said Berger. “The unimaginable. The inhumane act of having her face filled with shotgun pellets.”

Berger believes that Mackenzie was shot point blank in her head and that when she heard the gun go off she turned her head causing the bullets to spread across her face. Berger can’t believe that she even survived.

“There is something deep within this dog,” said Berger. “Something special in her spirit.”

That fighting spirit is contagious and now the rescue wants to fight for her. They don’t understand why the shelter didn’t contact the police when Mackenzie was first dropped off, even though they didn’t know how severe her abuse was.

“The shelter should have said ‘Sir, it is unacceptable for you to use your own knife to cut your own dog’s face like that.’ It should have been a warning flag,” said Berger.

All 4 Paws wants to get Mackenzie’s story out there so it can make a difference.

“It is important for people to know these things are happening but are getting swept under the rug,” said All 4 Paws founder Shannon Prouty. “We have to start with the laws. We have to educate, let people know this is predominant. Animal Control officers have their hands tied. Sometimes, they can’t do anything even though they know in their hearts it is wrong.”

All 4 Paws is not only determined to change things for dogs like Mackenzie and have started a movement called Song of the South. While they work on changing the laws they are also focusing on making sure Mackenzie finds the best home.

“She will have the best home,” said Prouty. “Where she will never undergo any pain, or torture, or trauma. Because that’s what she deserves.”