When a sea lion in Taltal, a shoreline city in Chile, saw a food vendor throw fish scraps “his” way, the marine animal thought the treats were meant for him. Little did he know the vendor was throwing the snacks to his dogs lying outside the cafeteria’s door. The free food started an unusual vocal confrontation between a dog and the sea lion. Who won? 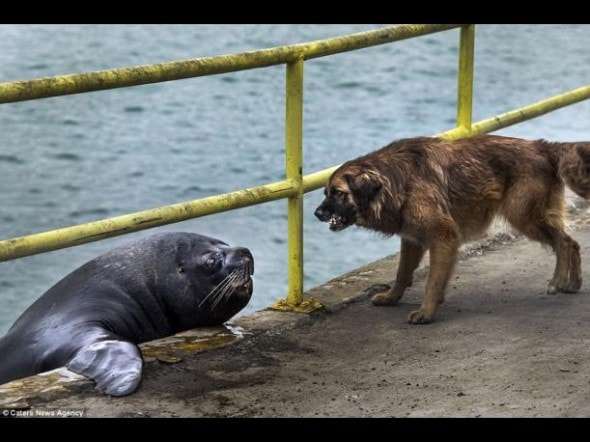 Lucky for us, photographer Alberto Ghizzi Panizza was ready with his camera to capture the dispute.

The fish pieces landed near the sea lion and large animal immediately picked them up. A dog rushed to marine animal and growled at it trying to force the sea lion to drop the food. Instead, the sea lion grunted back, showed its teeth and jumped back into the sea with the treat. 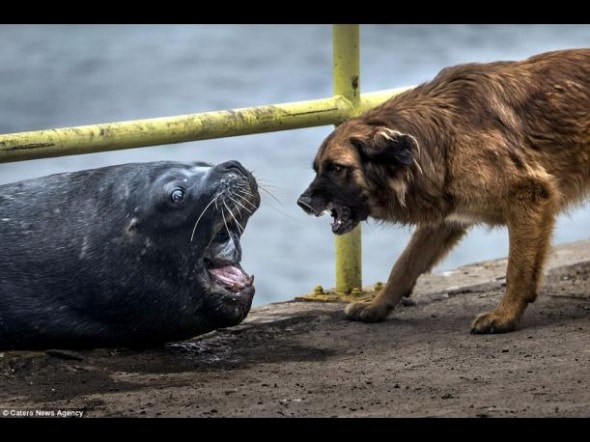 Ghizzi Panizza says this kind of face off is very common outside the cafeteria. The dogs are used to pelicans and sea lions stealing their treats but this was the first time the unusual face off was captured on camera.

The sea lion came out victorious this time, but the dog knows he has more treats coming his way.