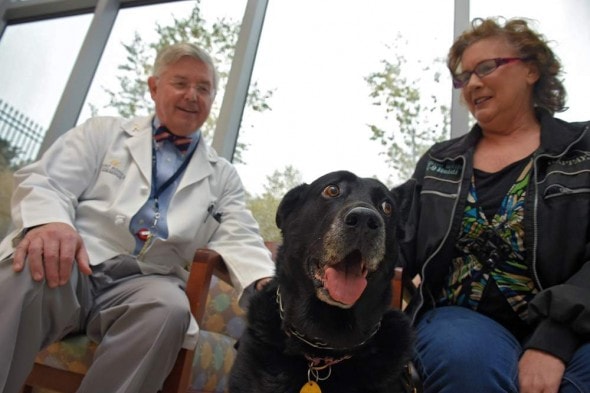 Heidi is a search and rescue dog.  For the most part, Heidi finds other lost pets, and is occasionally hired to find drugs, too.  One day in February, Heidi seemed to find something rather unexpected – deadly cancer hiding in her human’s lungs.

Anne Wills is Heidi’s human, and she describes some unusual behavior Heidi was showing when the heroic dog first detected something wasn’t right.

“She was physically barricading me on the couch,” said Wills.  “She was drooling and scratching at my arms.”

Wills is the owner of Dogs Finding Dogs tracking service based out of Arbutus, Maryland.  At first she though that Heidi might have been sick.  She took the dog to the vet and was told everything with Heidi was just fine.  That’s when Wills decided to get herself checked out as well.  A CT scan brought the problem into focus straight away.

Heidi isn’t the first dog to find cancer in a human.  Many people still aren’t convinced that dogs can actually detect cancer by smell, but the evidence that this is possible is overwhelming.  Since about 2004 there have been published studies of dogs detecting many forms of cancer in humans very accurately.

Wills is very lucky that Heidi found what she did when she did.  Luckily the cancer was in what doctors were calling “Stage 3a.”  In that stage the cancer had spread a little, but not so much that there was no hope for medical intervention.  If Heidi hadn’t found it when she had, and it got to Stage 3b, things could have been very different for Anne Wills.

“I’m so thankful for her,” said Wills.  “But if she starts acting funny again, I’ll be on my doctor’s doorstep, and I don’t care if it’s midnight.”