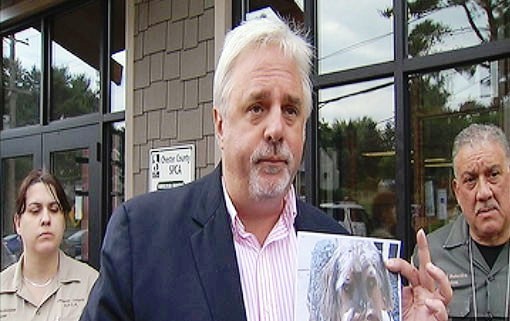 Coatesville, PA police responding to a fire Friday night were horrified when what they thought to be a brush fire turned out to be a cage containing the charred remains of a dog.

The University of Pennsylvania will be performing a necropsy to determine if the dog died prior to being set ablaze, but it seems apparent that the dog was purposely confined to cause as much suffering as possible.

“No matter how many scenes of animal cruelty, especially of dogs set on fire, you never get used to it,” Chester County SPCA spokesman Rich Britton stated.  “This is a companion animal, this is someone’s loved one, that’s how we look at it.  This treatment is intolerable; no one should accept this, that’s why we’re looking to the public for help.”

This is the second such incident since June.  A Yorkie was trapped in plastic bags, which were doused with an accelerant and set on fire.  Officials deemed the sight too disturbing and graphic to disclose photo.  Concerned owners of the missing dog were horrorstricken to find out what happened to their cherished pet on the news.

Animal Protective Services officer Craig Baxter was shocked at the condition of the dog upon its initial examination.

“In the eight years that I’ve been here I’ve never seen something so horrific,” Baxter said. “How someone could do this to an animal is beyond my belief.”

Pennsylvania authorities are desperate to put an end to this vicious and ghastly trend.  Anyone with information is asked to notify the Coatesville police or the SPCA.  The contact number for the SPCA is 610-692-6113, extension 213.  For those wishing to remain anonymous, the Philadelphia Animal Rescue Examiner tip-line may be reached at 215-821-9281.

All pet owners, particularly those in the Pennsylvania area, are reminded to keep an especially close watch on their beloved pets, and to immediately report any suspect animal activity or abuse to the proper authorities.