Every 65 minutes, a veteran commits suicide.  This is a terrible statistic, but hopefully as the number of therapy dogs increases, this number will decrease.  Veteran Erick Scott may be off the battlefield, but his fight isn’t over, and thankfully he has an incredible dog to help him win.

He spent 16 years overseas, but doesn’t always feel fortunate to be home when so many others didn’t make it.  He has survivors guilt and post traumatic stress disorder, causing him to relive the horrors of his past.  Even sleep brings no solace; his dreams are haunted.

The diagnosis of PTSD and the medications Erick was prescribed were no help.  He didn’t want to believe there was anything wrong with him, and threw his meds in the trash.  Only when he learned about K9s for Warriors did he learn that something could help.

The nonprofit organization pairs service and therapy dogs with veterans who have PTSD, traumatic brain injury (TBI), and military sexual trauma (MST).  Vets from all over the country wait over a year to make the journey to Florida for the perfect dog for them. 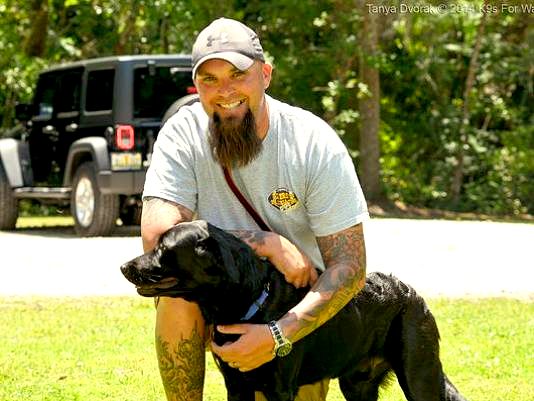 Erick was matched with a dog named Gumbo, who greatly helps ease his anxiety.  Though the well-trained dog obeys every command, such as “stay,” he knows when to break position to soothe Erick.  Though they may never leave him entirely, the symptoms are diminished in Gumbo’s presence.

A new K9s for Warriors facility is in the process of being constructed.  When it’s finished, the building will be able to house up to 16 vets while they complete their three-week training course.  This gives them plenty of time to get comfortable with their new companions before going home.  Vets do not spend a single cent on this service.

First Coast News partnered with K9s for Warriors and initiated Operation Orion, which is raising funds to help cover the costs of the new building.  Every dollar raised before January 2015 will be matched by the Weaver Family Foundation.  If you’d like to donate, please click here.