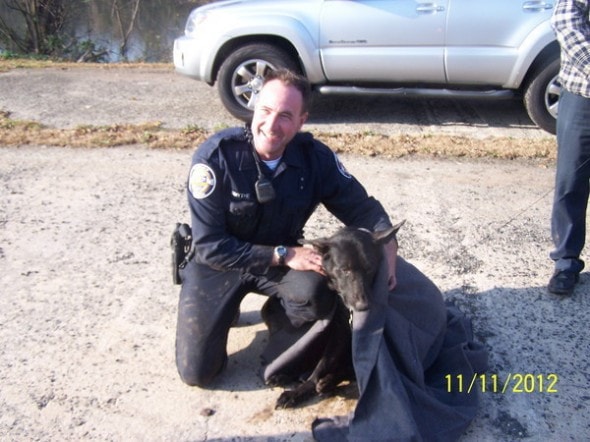 A heroic police officer with a big heart risked his life to save a drowning dog.  The dog was trapped and struggling and would likely not have survived had it not been for the selfless act of Patrolman Mark Smythe of the Royersford PA police department.

Smythe was on patrol when he received the call about a dog in distress in the Schuylkill River.  Krista Grubb was walking along the river and had noticed the struggling dog and made the call for help.  When Smythe arrived he called for a fire department water rescue team but felt the dog was at too much risk to wait so in he went.  “The dog was trapped underneath a log and only his head was visible. The dog did not have much time, according to Smythe,” Royersford’s Media Relations Officer, Tom Godin said.

Once Smythe was able to free the dog, several onlookers helped to get him and the dog back up the steep riverbank to safety.  Following the rescue the cold dog was taken to Royersford Veterinary Hospital for treatment and then on to the SPCA.   Smythe is being hailed as a hero, but the modest officer had this to say on Facebook: “Thanks everyone but it was Krista Grubb who truly saved this guy – She was walking her dog when she heard him whining, then looked down and saw him trapped in the water – without her calling 911, he would have surely perished.”

Smythe has a dog of his own and says he couldn’t ignore the peril that this dog was in, so he had to jump in and do something.  The fortunate pup has since been picked up by his grateful owners and s safely back at home.