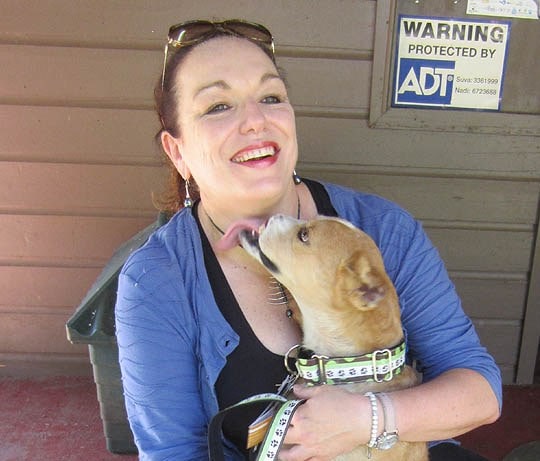 A dog who was malnourished and had her nose cut off 8 months ago is going to get a fresh start at life very soon.  Poppy, the playful mutt, had her nose accidentally cut off by a man who wielding a cane knife while he was slaughtering a pig.  She was brought to Animals Fiji Nadi clinic by a team effort between Master Pillay (a teacher at an inland Fiji School) and Julie Hoskison from Myola in Sigatoka.

Her injury had occurred months before she was brought in, and because she couldn’t eat for awhile after it occurred she was very underweight.  The Animals Fiji Trust began to get her to a healthy weight and to raise the funds necessary to take her to Sydney to repair her nose.  Their amazing efforts resulted in an overwhelming response from the public.  “Because of the interest generated through her story, we have not only managed to raise enough money to fund her trip but have also been able to purchase equipment for our Nadi animal clinic,” said Animals Fiji Trustee Casey Quimby.

India Davis, an 11 year old girl from Melbourne, managed to raise $3000 for Poppy, and she travelled to Fiji with her parents to donate the funds in person and meet Poppy.  Poppy’s story drew so much attention that she is now about to be a TV star, as popular Australian television show Bondi Vet decided to come in and film the journey to Sydney and follow her story. 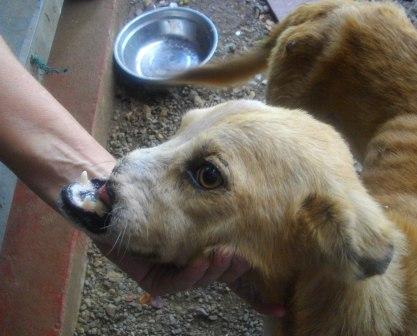 “Bondi Vet himself, Doctor Chris Brown, was in Fiji over the weekend to meet Poppy in advance of her long journey. Dr Brown will head up the veterinary team who will reconstruct a snout for Poppy which will all be part of the episode to be screened in Australia in 2013,” said the West Charity Trust (WCT), the parent organisation for Animals Fiji.  The Trust is grateful for the assistance and hopes that Poppy’s story will also help raise awareness about the clinic and the plight that many domestic animals in Fiji face.

As for Poppy, she is a loving and happy dog, with a long life ahead of her thanks to all of her generous supporters.

6 thoughts on “Poppy will get a new nose, and a new life”