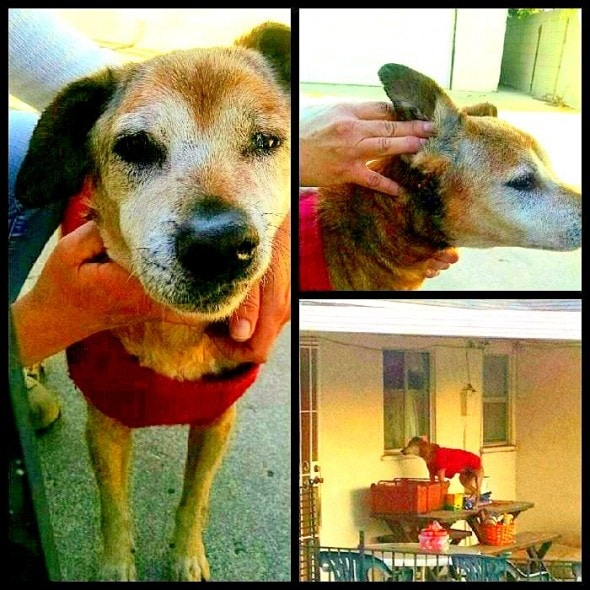 Jack is a senior dog who has never really known the warmth of a family or the indoors.  Having been adopted by a woman when Jack was just three years old, his human has never let him inside her home.  She even had two other dogs that did live inside, but Jack was never really housebroken properly, so he spent almost all of his life in the yard or garage, looking in through windows just wanting to be actually with his family.

“He often times looks through the windows from outside and howls,” said his Orange County, California neighbor, Debbie.  “I’m assuming because he’s cold, lonely and wants to be part of his family who is all indoors.”

Jack’s human’s daughter thought that it was about time to euthanize Jack.  He’s 17 years old now, and there is a large cyst growing behind one of his ears, and apparently neither the woman that adopted him nor her daughter care very much for him.  Lucky for Jack, a neighbor named Debbie had stepped in and convinced them to allow her a couple of weeks to try to find him a home.  Turns out, as of 1/4/2015, it was made official.  Leave No Paws Behind is rescuing Jack.

After many shares on Facebook, Debbie’s post finally reached Toby with No Paws Left Behind, and he will be taken in and get a second chance to be someone’s best mate.  To check out Debbie’s original Facebook post about Jack, click here.  Also, please check out No Paws Left Behind’s website.  If you would like to adopt Jack, please email [email protected] for more info.