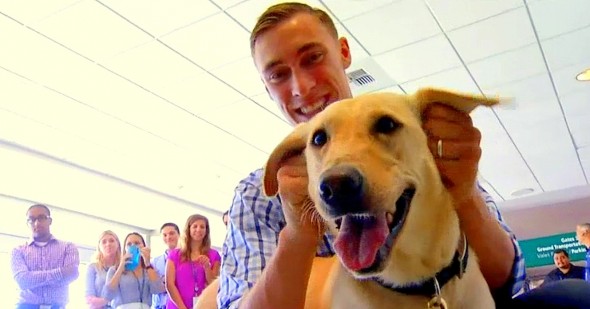 Marine Sergeant Sam Wettstein has just had the most fantastic reunion:  on Friday, Belle, the dog he spent seven months serving with in Afghanistan, came home to be a permanent member of his family.

“Belle!  Hello, gorgeous!” he said excitedly as the golden Lab trotted over to him in the airport.  “Come here.”

The two were paired together as a team to search for IEDs.  They were to clear the way and make a safe path for troops following them; Belle sniffed out explosives, Wettstein deciphered her reactions.  Dogs like Belle are estimated to save about 200 lives during their service.

“She did her best, I did my best,” Wettstein said.  “When you’re both on the same page and you’re doing your job correctly, things seem to look a lot better at the end of the day.”

Having Belle around greatly helped him deal with homesickness and gave him something to look forward to and someone to take care of.

“It helped a lot.  It helped me a lot to focus on Belle and her well-being.” 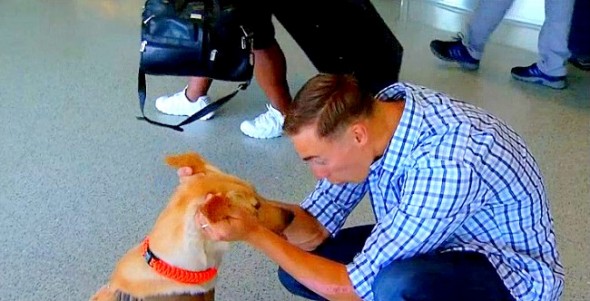 Wettstein came home a few months ago, but sadly, Belle had to stay behind.  He hoped that eventually they’d be reunited.  Now that day has come, and things feel right again.

“I was missing a part of me.  I was trying to fill the void and now my void is filled,” he explained.  “Having that kind of relationship with a dog, you know, you get this bond.”

His wife Jessica is grateful that he had that kind of companionship while he was deployed, and is happy to welcome her home.

“Obviously it’s hard not to worry when they are in that kind of situation, but having a companion I think definitely helped,” she commented.  “It’s an incredible opportunity.  It’s meant to be.  She’s obviously meant to be part of our family.”

Wettstein says it’ll take some adjusting, but he’s sure Belle will love her new home.

“It’s going to take some reacquainting and some relaxing, but I think it will be a really good thing for all of us.”