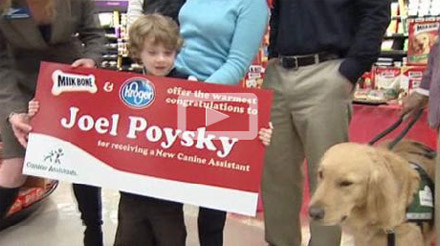 An eight year old Texas child with muscular dystrophy received new hope Thursday in the form of a donated service dog. Joel Poysky, 8, was diagnosed with the degenerative disease when he was 3 years old.

On Thursday, he and his family learned he’ll have some much-needed help as his symptoms worsen – a specially trained service dog. “Joel’s path in life is going to be different than we originally planned. It really makes us feel good to know that he will have a dog, a canine helper, to walk along that path with him,” Joel’s dad, James Poysky, said.