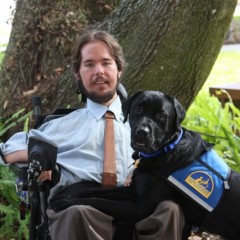 AJ Brockman was speechless when he found out he and his service dog Drew were nominated for the American Humane Association’s Hero Dog Award. Brockman has been a wheelchair since he was 2-years-old and with Dre by his side giving him the independence he’s always wanted.

Brockman was diagnosed with Spinal Muscular Atrophy when he was 2-years-old. He was matched with Dre last year after his first service dog passed away. The two have developed a tight bond and work amazingly well together.

“Once I started working with Dre and he started responding to my voice, listening to the things I asked him and promoting my independence, everything clicked,” said Brockman.

Brockman developed a passion for art at a young age, but as his disease progressed he lost strength in his hands. He had to switch from painting his art to using a computer. Today he is still able to create art using one finger in his left hand. Sometimes though his hand will fall off his mouse and when it does AJ is there to help, lifting it up back onto the mouse when Brockman is unable to. Without Dre by his side Brockman wouldn’t be able to continue creating his art.

The American Humane Association started the Hero Dog Awards in 2010 to celebrate the remarkable bond between dogs and people. There are eight categories in which dogs can be nominated in, such as Dre’s category Service Dogs. The public gets to vote and choose a finalist for each category. Then the public along with a special celebrity judging panel choose the winner among the eight finalists.

Brockman knows Dre is deserving of the award and hopes he can win it for him. Not only as a way to say thank you for the independence Dre has given him, but to also bring awareness to service dogs.

“He embodies everything that there is to be a hero dog and I want to win more for Dre than myself,” said Brockman.

You can vote for Dre and also see the other nominees at the Hero Dog Awards website.