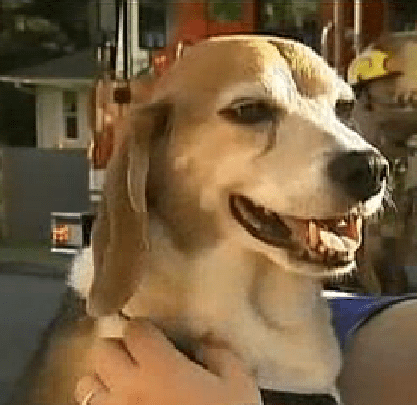 When Ali Thomas came home to find her apartment complex was on fire she panicked not sure if her beloved 13-year-old beagle Comet had made it out. Comet was safe all thanks to a neighbor Thomas had never met.

Shawn Riley and Jeb Mackenzie were across the street when they heard an explosion and saw the fire break out. They ran across the street, not even stopping to put on shoes, to make sure everyone was alright and safely out of the building. The two men ran from door to door making sure everyone was out. When Riley reached Thomas’ door he spotted Comet sitting there in the smoke-filled apartment.

“At one point, I looked through the smoke in the apartment in the end, and I saw a beagle just sitting there in the smoke,” Riley recalled. “I snatched up the dog, smoke was really bad, I had to get out.”

Without Riley’s effort Comet most likely wouldn’t have made it, as Thomas’ apartment was burned completely and she lost all of her possessions.

Meanwhile Thomas was at work the entire time. When she arrived on the scene she was in a complete panic not knowing where Comet was or if he was safe. Then she spotted Comet on a leash being held by a firefighter. She is extremely grateful for the neighbor she’s never met.

“I cannot thank the person that did it enough,” said Thomas. “I’d just love to hug that person and say thank you.”