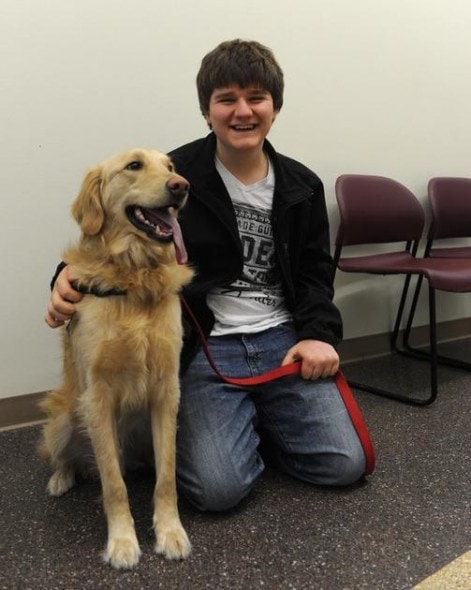 Keegan Halsey hasn’t always had the easiest time. The 16-year-old suffers from agoraphobia, extreme social anxieties and other issues that have made him feel uncomfortable, not even in his own home. Medications have helped some, but one thing that has really helped Keegan is a dog named Dillion.

Keegan’s anxiety and agoraphobia was so bad that he would barricade himself in his room. “A lot when he was younger,” said his mother, Peggy. “When he first started, it was for days.” Eventually Keegan was able to get some of his anxiety under control with medication. Still medication can only do so much for him. A golden retriever named Dillion is helping where medication can’t.

Dillion is a service dog from Alaska Assistance Dogs. Keegan helped to train Dillion, and in October the two passed their public access test.  “I was worried a lot that maybe it wouldn’t work out because I’ve done so many things and usually they don’t work out – like school,” said Keegan.

This time it did work out for Keegan, and he is learning a lot from Dillion. Dillion teaches Keegan responsibility and helps him feel calmer and more comfortable. “Dillion has done wonders in that boy’s life. Keegan is so much more confident and outgoing and at peace,” said his mother. “He’s a lot happier, and obviously that makes me happier.”

Keegan is a lot happier too. “He’s my best friend,” said Keegan. “With him around, stuff just seems easier.”