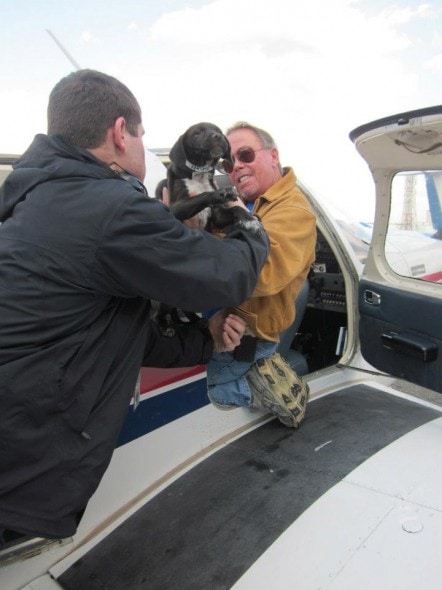 Seventeen puppies took a flight for a second chance at life Friday. Thanks to the efforts of Home for Good Dog Rescue and Pilots N Paws they were taken from high-kill shelters in Georgia and South Carolina to New Jersey where they will stay with foster families until they find their new permanent families.

In mid-January Home for Good Dog Rescue visited facilities in Georgia and South Carolina and picked 100 dogs to transport to New Jersey where they would get a second chance. The dogs were all placed with fosters in those states until they could be transported to New Jersey. Typically the rescue transports animals from high-kill shelters every week by van, but for only the second time Home for Good Dog Rescue partnered with Pilots N Paws to rescue dogs by air.

“The last transport on the plane we only had four on it,” said Good Dog Rescue spokesperson Jackie Bucuk. “So we’re excited to have more dogs this time.” Pilots Nick O’Connell and O’Neil Jones from Williamsburg, Virginia flew the puppies from Rock Hill, South Carolina to New Jersey, arriving around 3:30pm on Friday afternoon.

Once on the ground the dogs are microchipped and groomed by Good Dog Rescue. The rescue doesn’t have a physical shelter, but a network of 70 foster families that take the dogs in until they find permanent homes. “Our dogs become very adoptable because our fosters are really good at teaching them things,” said Bucuk. “It’s nice for the dogs. They came from a bad situation and we don’t like to leave them in a cage. It’s nicer to be with a family, so it’s great.”