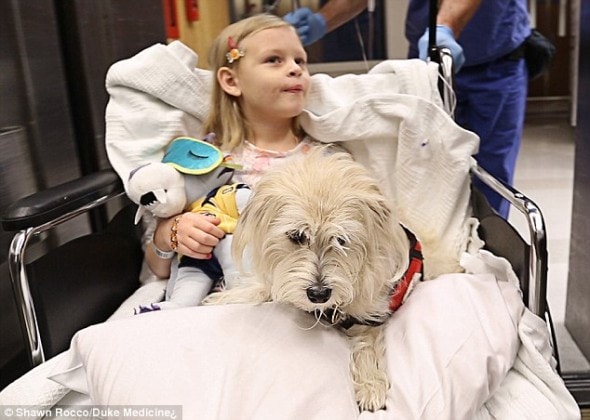 The bond between Kaelyn Krawczyk and her service dog is strong. Kaelyn suffers from a rare disorder that causes allergic reactions with little warning. JJ is so skilled at detecting when Kaelyn is having a reaction that when she underwent surgery this week the doctors wanted JJ there with her.

Kaelyn, who goes by “KK”, is a seven-year-old North Carolina girl who 18 months ago was paired with a service dog named JJ to help with her rare condition called mast cell activation disorder. JJ was rescued from an animal shelter and trained to alert when KK’s mast cells are acting abnormal. KK’s condition causes her body to release chemicals often for unknown reasons that cause allergic reactions. The reactions can range from a simple flushing of her face to severe reactions such as drops in blood pressure that could lead to heart attacks.

KK used to have three to four severe reactions a year, but with JJ around she has had only one severe action in 18 months. JJ is able to alert to a reaction before KK even feels any symptoms. JJ is even trained to fetch an EpiPen to bring to KK’s parents.

“JJ has made it possible for us to give KK a more normal life,” said KK’s mom Michelle.

Doctors from Duke University Hospital recognized what a benefit JJ’s skills of detection are and allowed her to help out with KK’s surgery on Wednesday.

“It struck us that JJ is really just an additional monitor that provides information about what’s going on with KK,” said Dr. Brad Taicher.

KK was having a procedure to try to determine the cause of her recurring kidney infections. Allergic reactions can often happen while patients are going into and coming out of sedation for surgeries. Doctors wanted JJ on hand to help detect if anything went wrong with KK.

JJ’s trainer Deb Cunningham accompanied JJ to help communicate any alerts JJ may have. JJ did indicate a few minor alerts while KK was coming off anesthesia, but the procedure went well. Dr. Taicher was impressed with JJ’s abilities.

“It sounds silly, in this age of technology, when we have millions of dollars worth of equipment beeping around me, that we had a little dog who was more sensitive than all the machines,” said Taicher.