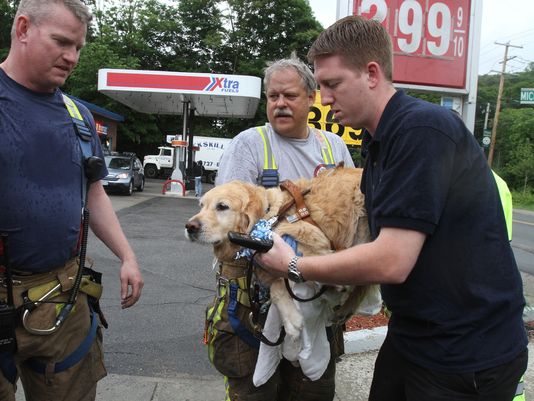 The driver of the school bus in Brewster, New York said that they never saw the woman and her dog crossing.  The bus was carrying two kindergarten students on their way to school when it struck the pair at 8:15 AM.

Stone, who is 62, suffered a broken right elbow, three broken ribs, a ankle and a cut to the head from the impact.  Bingo had a cut on his leg that was down to the bone.  This was all witnessed by Xtra Mart gas station manager Paul Schwartz, who jumped in to help.

While the rest of the EMTs were attending to the injured humans in the incident, Schwartz and another EMT worked on bandaging Bingo up, and administering any first aid needed.

“The dog was being a good sport, really calm,” Schwartz said.  “He sat with me the whole time.  He was limping as we put him on a big blanket on the sidewalk and it started to rain.  He let us wrap up his leg without any problem.  He wasn’t barking or crying or yelping.  But he kept pulling toward her.  After she was put on a gurney and taken away, he stopped doing that.  He seemed a little lost after she left.”

Unfortunately, there are regulations concerning dogs riding in an ambulance.  So, after Stone was safely off to the hospital, Schwartz helped load Bingo onto a volunteer fire truck, and he was taken to a vet.

A staff member at the Middlebranch Veterinary Clinic in Paterson, NY confirmed that Bingo was being treated there on Monday.  Brewster Police Chief Del Gardo said later that the dog was undergoing surgery on its leg.  As of the writing of this article, Bingo is through surgery, and expected to recover.  What a brave dog!