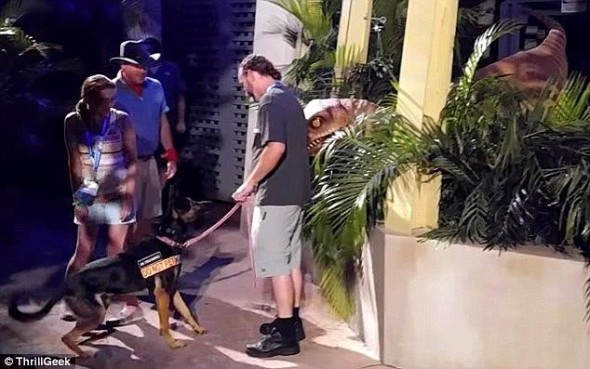 Dogs are some of the bravest and loyal creatures ever to exist, and they prove it in many ways all the time.  Like this dog, that was willing to take on a velociraptor that was “threatening” his human at a theme park in Orlando, Florida.  If we were that velociraptor, we would have backed down, too!

The incident occurred at the Universal Studio’s Island of Adventure theme park.  There is a section of that park dedicated to the Jurassic Park movies, and that’s where one can go if they’d like to have their own encounter with a dinosaur.  Well, animatronic ones at least.

As this man was going through that section of the park with his service dog, they came across a velociraptor.  It was really half a person in costume and half a puppet, but this dog wasn’t taking any chances.  As soon as he took one look at that dinosaur sneaking up on his human, he sprang to action, and scared the dinosaur away!

Someone else near where this happened caught the action on video and shared it with social media outlets.  You can hear the others in the area laughing as the dog really seems to think this is some strange animal going after the person he’s sworn to protect.  We would have simply run away.