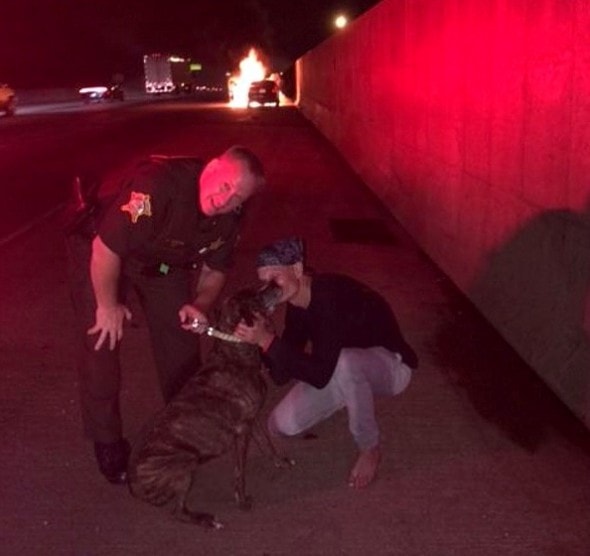 An Indiana dog is alive and well today thanks to a sheriff’s deputy who risked his life to save him.  A car started on fire and its two human occupants got out, but weren’t sure if their dog was still inside.  The officer didn’t hesitate to dive in and retrieve the poor thing, who had been trying to hide from the flames behind the driver’s seat.

Deputy Chief Dan Murchek of the Lake County Sheriff’s Department was on patrol when a call came in about a car fire.  When he arrived about two minutes later, he saw two men standing beside the vehicle, which had flames shooting out from under the hood and creeping to the interior.  He asked if everyone had gotten out, and one of them men said he wasn’t sure if the dog had run out when they did.

Murchek looked inside and was able to see the dog hunched down on the floor behind the driver’s seat. (Why neither of the other men bothered to do that is beyond me.)  The back door was locked (again fellas…), and he was not successful at breaking the window.  So he took a deep breath and went in through the driver’s door.

But the terrified dog snarled and pulled away from him.  The heat was unbearable for more than a few seconds, so Murchek emerged to take a breath and then go in for another try.

“I’ve been bit before, but I was going to try,” he explained. “I said it’s now or never and got on my knees on the seat and reached into the back and grabbed the dog’s collar and his scruff and pulled him out. I was a K-9 officer and I love animals, and I didn’t want to see him burn to death.”

The heroic officer handed the dog, named Bella, over to owner John Manning.  He told the officer he had rescued Bella seven years ago.

“I told him he’s going to have to change the dog’s name to Lucky,” Murchek said.

A number of passersby, held up in traffic because of the car fire, applauded his efforts.