Seven-year-old Matt Hannon has been given the best birthday presents a boy could hope for: the gift of life, and a dog to share it with him.

Matt was diagnosed with Ewing’s carcinoma, a rare form of cancer, when he was just seven months old. Doctors believe he developed it his left forearm in utero, and it later metastasized in his lungs and liver. Most of the first year-and-a-half of his life was spent in hospitals. His left arm was amputated before he turned one, and he was given only a 30 percent chance of survival.

“Ewing’s carcinoma, typically, if it’s localized has about a 70-percent chance of survival,” said dad Chris Hannon. “When it metastasizes, the numbers are about 30 percent.”

The survival rate was low, but survive Matt did. He has been cancer-free for five years, and through it all, has had his stuffed dalmatian with him.

“He was given a stuffed animal probably within his first year of treatment, and he still has it today,” Chris explained. “He takes it everywhere he goes – doctors appointments, he sleeps with it, the whole nine yards.”

Two-year-old Basset Hound Jo Alice also was given a slim chance to live. She and her eight puppies were dumped at a shelter in North Carolina. The puppies found homes, but no one wanted Jo Alice.

“They had no interest in the mother, so they put her on the euthanasia list,” said Eric Stevenson, president of Tri-State Basset Hound Rescue.

Carolina Basset Hound Rescue helped get her out of the kill shelter and into Pennsylvania. Scott Messinger, owner of EyeLand Optical Centers, is a volunteer pilot for Pilots N Paws and has flown over 3,000 dogs out of southern kill shelters and up north for chances at long and happy lives. Jo Alice is now one of those dogs.

Matt loves dogs, and knew he would be getting one soon. He and his brothers, 10-year-old Nicolas and 7-year-old Justin, were taken to the Fox Breeze Kennel in North Annville Township, PA.

“I just thought that we were gonna look at a dog,” Matt said excitedly.

Matt just turned seven on Friday, and his New Jersey family had spent a couple days in Hershey, PA. But the big surprise was Jo Alice.

“She’s so cute,” he said, hugging his new friend.

Stevenson called the match a “special story,” and was happy to have been involved.

“They’re both survivors,” he said. “You had a child that was born with cancer and was given a 30-percent chance to live, and he beat those odds. You have a dog that was put into an overwhelmed southern shelter that probably had lower odds than that, and through the work of a heck of a lot of great people in a couple states, this happened today.” 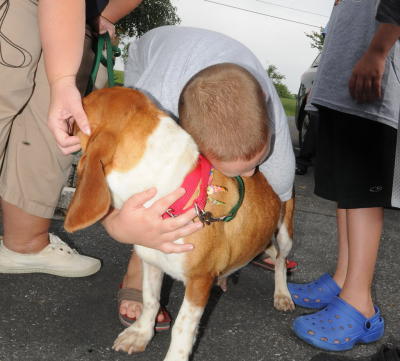