Emaciated. Dehydrated. Frozen. This was how a wee Chihuahua mix was discovered, barely clinging to life in a snow bank in Cheektowaga, N.Y.

The two women who found her wrapped her in blankets, put her in a hamper and set her in the car with the heater running — then they called police. Now in rescue/foster care, she is stable, but has a long recovery ahead of her.

Officer Thrun was left a warm bed on Tuesday night to respond to the incident.

Once he saw the dog’s dire condition, he took her to the Greater Buffalo Veterinary Emergency Clinic where over six hours she was treated with antibiotics, salve for an eye injury and fluids. 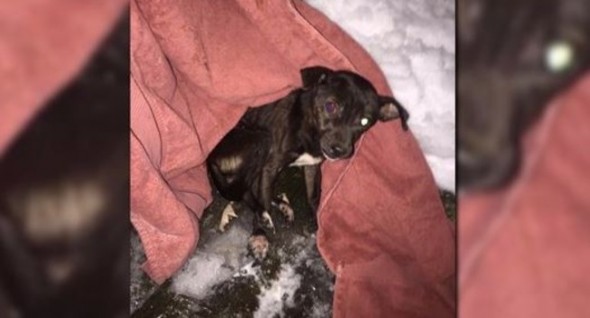 Now the dog, who had no collar, no chip and still no owner claiming her, is resting in a rescue foster home through Destiny’s Road Animal Rescue.

“My guess is somebody maybe couldn’t care for her correctly and they basically just stopped the car and let her go,” Officer Thrun, said.

Thrun said they had no tips on who might be responsible for this dog but that person could face charges of animal abandonment and failure to provide veterinary care. Both are misdemeanors.

These are hard charges to prove, according to Thrun, and for now they are focused on healing her.

“She’s going to need to trust people again and right now she doesn’t,” Thrun said. “And I don’t blame her”.

The road to recovery for the dog is going to rack up some medical bills.

The Destiny’s Road Animal Rescue will be handling that and they have a PayPal donation link set up if you want to help.

No owner has stepped up to claim her and she is in rescue foster care now with a long road of recovery ahead.