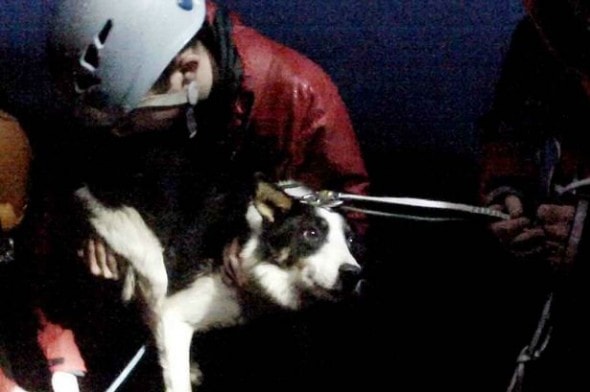 When a collie dog named Chip became stuck in a rocky crevice for two days, mountain rescuers tried to reach him but were too big to fit. The only way to save the dog was to send a slenderly built veterinarian named Kes Taylor down the crevice, even though she had little experience in mountain rescue.

Chip was rounding up sheep on a mountainside in Snowdonia, North Wales when he fell down the crevice. Mountain rescuers were called to look for the missing dog and found him when they heard his whimpers from inside the crevice.

“The dog was found stuck in the bottom of a rock crevice that was 25 meters deep, extremely narrow and halfway up a steep crag,” said Rob Johnson, member of the mountain rescue team.

The rescue team lowered the skinniest built of their men but half way down he became wedged and had to be pulled out. None of the men on the rescue team would be able to fit down the crevice to reach Chip.

On hand though was 35-year-old Kes Taylor. The veterinarian had been called to the scene to treat Chip once he was rescued from the crevice. Her role in the rescue soon became much more. The slenderly built woman was the only one who had a chance of reaching the stranded dog.

“They picked me after some of the men had to go and got stuck half way down,” said Taylor. “Luckily for Chip I was thin enough to squeeze my way along the gap to reach him.”

Taylor was definitely a novice to this type of activity but with the rescue team’s support she was able to successfully save Chip’s life.

“All the time the team members were encouraging me and I felt totally safe,” said Taylor. “They were fabulous.”

The daring rescue was caught on camera by one of the rescuers. The rescue took in total around two-hours and the mountain rescue team was impressed with Taylor’s bravery.

“The whole time inside the crevice Kes was at risk of being stuck herself,” said Johnson. “She was incredibly brave and if it wasn’t for her we may never have reached Chip.”

Kes and Chip successfully made it out of the crevice and Chip was doing well and seemed to be unharmed.

“We fed him sausages, steak and some dog food before he walked away with the team,” said Johnson. “It’s a shaggy dog story with a happy ending.”