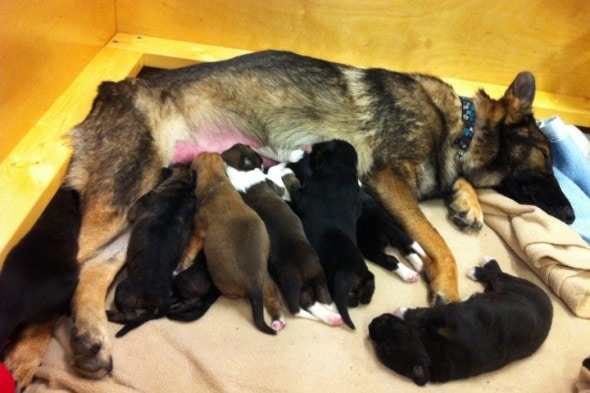 When a box of orphaned puppies was dropped off at an animal shelter another dog at the shelter adopted them and is caring for them along with her own two puppies.

In early November a German Shepherd named Timber was dropped off at the Langley Animal Protection Society in British Columbia. She had been hanging around a man’s property for several months and he had attempted to take her in but she kept escaping from his yard and he feared she would be hit by a car.

Timber willingly took on all 8 orphaned puppies and is now caring for all ten puppies.

“So far she’s been great, she’s wonderful. She treats them all the same,” said Becky Hemphill, trainer and adoption counselor at LAPS.

The shelter set up a livestream, at first so staff could keep an eye on Timber and the puppies when not at the shelter, but soon the over a thousand people a day were watching the stream of Timber and her puppies.

You can watch the livestream of Timber and her puppies here.

If you would like to donate to LAPS to help care for Timber and all ten puppies, donations can be made through their website.