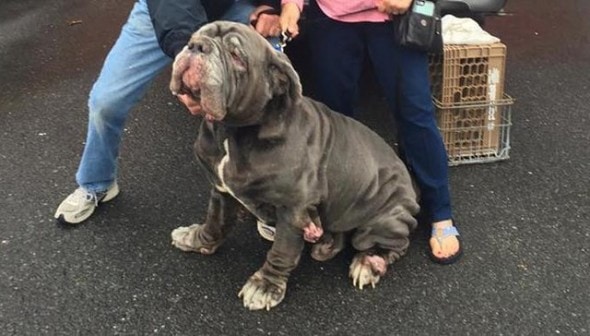 One should never be too quick to judge a book by the cover, the same way a dog should never be judged simply on how they look.  That almost happened to Loki, a Neapolitan mastiff picked up and taken to the Manhattan Animal Care Center (ACC).  Loki’s very large size and weight, made people think he was scary or aggressive, and he almost lost his life for it.

Being afraid of his size, the animal control officers that were called in to get him used a dart to sedate him.  After he was knocked out, they gathered him up and took him away.  Only two short days after arriving, before anyone had any interactions with him at all, he was put on a short list of dos to be euthanized.

Lucky for Loki, his former human found out about this giant, scary dog that the ACC had.  He stepped in immediately to defend the dog.  He told them of how much he loves people, especially kids, and even gets along with cats that are willing to get along with him.  He wanted to make absolutely clear that Loki defines the term “gentile giant.”  In fact, had Loki’s human not been evicted, and forced into a situation that refused to allow him his dog, Loki would still be living with him! 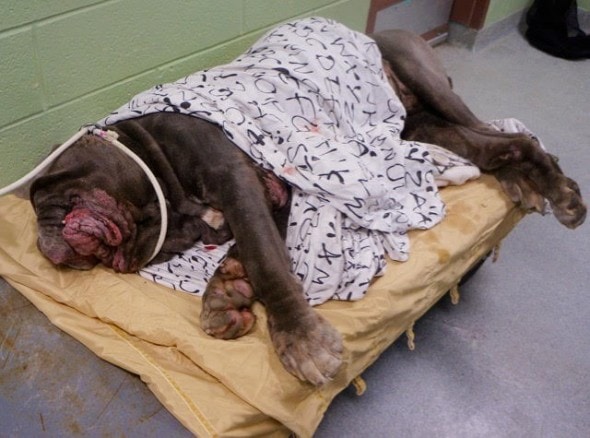 Loki may have been spared a terrible fate, however things at the shelter didn’t get any easier for him.  He still received little human interaction, and despite having someone vouch for him, many people were still afraid of him.

Someone that is with Rescue Dogs Rock NYC, and knew if they didn’t do something fast, Loki might still meet an awful end.  They went to the animal care shelter, and took him out of there.

“At first, upon meeting him, he is quite intimidating due to his size, and you can see he’s emaciated and should be at least an additional 50 pounds,” said Stacey Silverstein of Rescue Dogs Rock NYC in an interview with The Dodo.  “Honestly I was a little intimidated myself but quickly he won me over.” 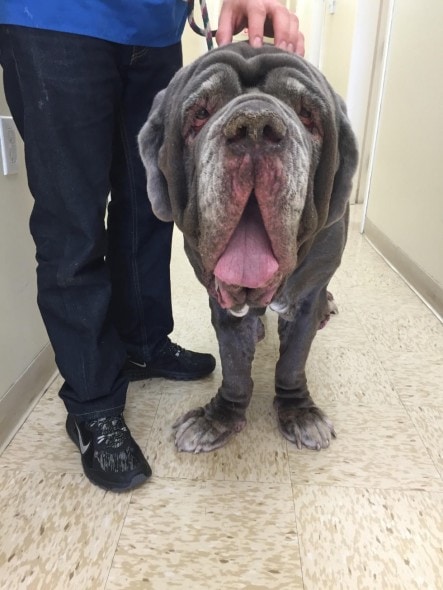 Loki continues to win folks over with his nature.  As soon as someone was able to get over his size and look, they found a loving and gentile cuddle-bug, who just wants to make his humans happy.  Well, that and a big juicy snack every now and again!  We imagine that a dog that size can eat!

“He’s just a huge baby who loves hugs, belly rubs and to be petted,” Silverstein said.

This past Monday, what the ACC though was impossible, actually happened.  As one could imagine, as soon as Loki’s story hit the internet, offers to adopt him came pouring in.  However, even though many people wanted to bring Loki into their home, only one family could be chosen, and now Loki resides with them.  His new family loves him very much, and admit that he may be a very big dog, but his heart is much bigger! 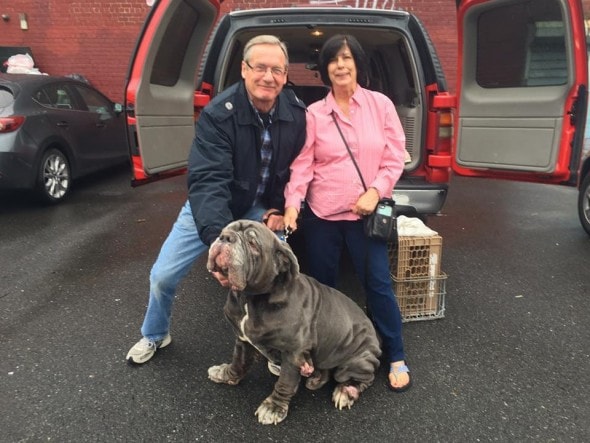