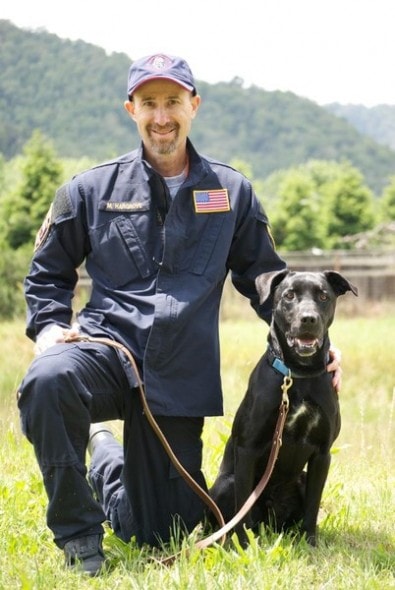 In 2008 Hayden arrived at the San Luis Obispo County Animal Shelter as a stray. His background was unknown but he had likely been abused and abandoned. Despite his past Hayden continued to be a happy dog and it was soon recognized that he had a lot of potential.  Adopted by the National Disaster Search Dog Foundation in 2009 Hayden has become a certified search-and-rescue dog and his skills have been helping with the recovery effort in Texas after a fertilizer plant exploded last week.

After arriving at the local shelter in 2008 Hayden was transferred to the Woods Humane Society where they worked with him to ready for him adoption. “Puts a child down my neck every time I tell his story,” said Steve Kragenbrink, the community programs director at Woods. “I am one of the few staff members out here who still remember him from his days as a Woods dog.”

Hayden had been found as a stray and was likely abused and abandoned by his previous owner. “He had visible scarring around his muzzle where potentially, we are under the impression that his muzzle was wired shut as a form of bark prevention,” said Kragenbrink. Despite his past Hayden was still a happy, friendly dog with lots of energy. Volunteers quickly realized that Hayden was special and could be a search dog, so they contacted the National Disaster Search Dog Foundation.

In April 2009 Hayden was adopted by the foundation and placed with retired police officer Mike Hargrove in Texas. Hayden lives and trains with Hargrove and together the two are a first responder team. Last week a fertilizer plant explosion in central Texas injured hundreds and left at least 14 people dead. K9 search teams, including Hayden and Hargrove, were some of the first on the scene. Together Hayden and Hargrove have been searching damaged and destroyed buildings looking for people trapped in the wreckage.