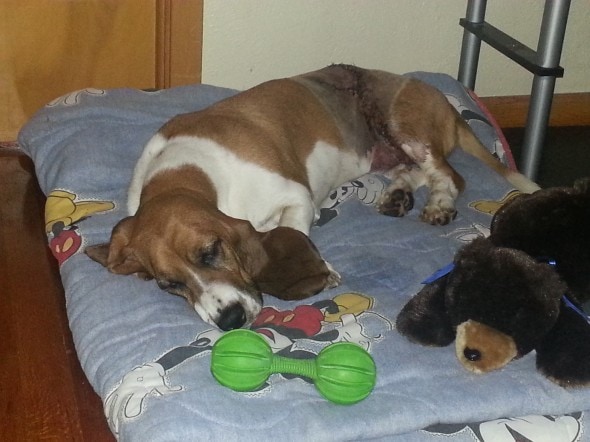 Janie, a shelter dog, spent a scary night outside during a blizzard in December when she slipped out of her collar while out for a walk.

Janie, a basset hound, has lived at the Dogs Forever Shelter in Cedar Rapids, Iowa for about a year. A volunteer was taking her for a walk when Janie managed to slip out of her collar and run off right before a blizzard rolled through. Volunteers were unable to find Janie before the storm hit and Janie had to spend the night in the cold and snowy conditions.

The next day volunteers finally found Janie in the snow. She had sustained serious injuries to her stomach and one ear.  Volunteers rushed her to the vet who attributed her large abdominal wound to being hit by a car. “She initially had surgery to close up the wound on her side, we were kind of in a wait and see mode on her ear,” said Janie’s foster mom Michele Means. “We weren’t sure how much damage had been done by the frost bite.” Janie has had to have around the clock care but she is doing much better.

Janie will still need to have another surgery to remove her severely damaged ear canal. Janie’s medical bills have already reached $2,000. Means says that it is well worth it though, “helping animals that can’t help themselves, or anyone, people, children, is a rewarding thing to do.”

Those wishing to help with Janie’s expenses can make a donation at the Dogs Forever website or send a check to the following address:

1 thought on “Shelter dog survives night lost in a blizzard”