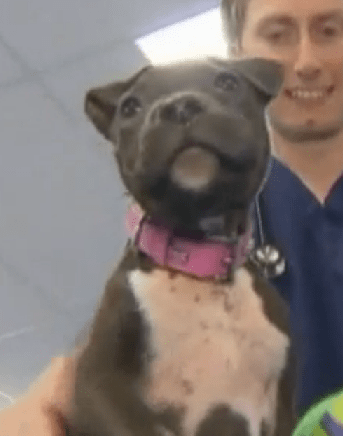 A nine-week-old puppy is alive and doing well after suffering from anti-freeze poisoning thanks to an unusual cure, straight vodka.

Stacy Zammit noticed her new American Staffordshire puppy Cleo was behaving strangely. “She was giving us a bit of a scare because she was really disoriented,” said Zammit. “She couldn’t stand straight, she’d fall over.” Cleo began to refuse food and was constantly crying. Zammit rushed her to the vet.

That’s when it was discovered that Cleo had anti-freeze poisoning. The only cure for coolant poisoning is pure alcohol. Traditionally ethanol is used, but in its absence the vets had to use a less traditional treatment. The vet just happened to have a bottle of vodka, a Christmas gift, handy. So Cleo was started on a vodka drip that ran in through her nose and into her stomach. “There’s toxins called etholyn-glycol and they’re very, very harmful to the kidneys,” said veterinarian Matt Pascall. “So what we need to do is give them alcohol and in this case we gave her vodka to try to mop up some of those toxins.”

Cleo was given vodka every six hours for two days. “If we put it in human terms, for me it would be the equivalent of having 7 or 8 shots every four hours,” said Pascall. Although use of vodka is rare it most likely prevented Cleo from developing renal failure. Cleo is now back to being a healthy and happy puppy.