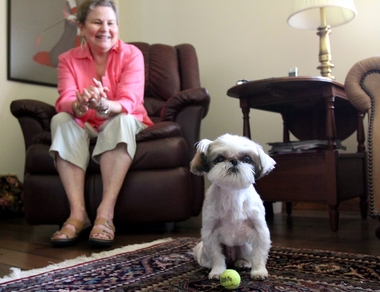 October is National Breast Cancer Awareness Month, so we thought we’d share a story of how one tiny dog made a huge difference – by saving a woman from breast cancer.

Four years ago, Pitman, New Jersey resident Nancy Granato was watching her granddaughter Domenica’s dog, Taffy, while she was in school. This is what she did every week day, but that day would be different – it was the day the Shih-Tzu saved Nancy’s life.

Taffy was sitting on Nancy’s lap when she started acting strangely. She began circling on her lap, and then gave a sharp nudge to Nancy’s left breast. Then Taffy did something even more bizarre – she got down on the floor and barked, and wouldn’t stop. Taffy never barked.

“We thought she was mute for a long time, because she didn’t bark,” Nancy said. “But she would not stop barking.”

Realizing that Taffy was trying to communicate something important to her, Nancy checked the spot the dog nudged and was surprised to feel a lump. Not a hard mass, but a soft lump, something that might have gone unnoticed had it not been for Taffy.

Nancy went for a mammogram, but nothing unusual was found. She wasn’t satisfied, and went for an ultrasound.

The doctor could feel something, but felt it was nothing to be worried over. However, Nancy was not satisfied with this answer. She knew something was amiss. So she called a surgeon who asked her to come in for a biopsy. Four days later, the results were in: Nancy had cancer.

“I did listen to the dog, but I also listened to me,” she said. 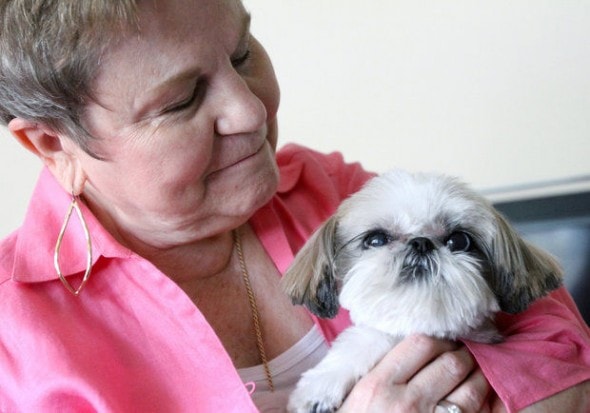 Luckily, she was in the first stage of breast cancer. Two weeks after being diagnosed, Nancy underwent a lumpectomy. She did not have to have a mastectomy, but she had to endure 34 arduous rounds of chemotherapy.

“It was very rough. I was exhausted,” she explained.

Nancy tried to stay strong throughout, but on those days when it was just too much to bear, Taffy was there for her.

“I cried initially, and I held the dog for a long time,” said Nancy.

She has now been in remission for the past four years, and it’s thanks to Taffy.

“We call her our little miracle dog,” her husband, Lou Granato, said.

Many don’t believe them when they praise Taffy for her keen sniffer, but doctors are not surprised.

“[The doctor] said there’s something in the breath they pick up on. They think it’s most dogs,” he said.

Taffy spends a lot of time on Nancy’s lap, so she would easily detect an odorant coming from her breath.

“[The doctor] said I may have been weeping from the breast, and she may have picked up on that,” she said.

Nancy’s experience has taught her not only to listen to what animals are trying to tell us, but to also listen to yourself.

Last month when she went in for a check-up, Nancy wasn’t concerned, even when another lump was detected.

Nancy and Taffy were right. When the results came back, this time the lump was benign.