When the average person thinks about dogs involved in dog fighting rings, they think of a scary, vicious pit bull with a drive to kill. They never imagine that a dog involved in this cruel human induced act could be a timid, loveable, female, pocket-sized pit bull with hundreds of scars on her body, a severely disrupted left wrist, and a mauled right leg missing a paw.

This is Roo. One more innocent dog forced to fight for her life in the dog fighting world. Fortunately the 2 to 3-years-old canine was rescued on August 23, 2013, by the Georgia Bureau of Investigation (GBI) from a multi-state dog fighting ring.

Many know her as Roo the resilient, and her name comes from her resemblance to a kangaroo. Due to her injuries, Roo looks and bounces just like one.

“When the GBI went to serve an arrest warrant for suspects involved in the multi-state dog fighting bust, the suspects were not there,” said Katharine Luongo, volunteer and foster parent for Friends of Dekalb Animals (FODA). “There were several dogs present, including Roo. Dekalb County Animal Services took all of the dogs into their care and arrested the woman that owns the house. When we met Roo, we knew Friends of Dekalb Animals had to find a way to help her.”

From all the dogs rescued that day, Roo was the one in worse shape and the only one with enough visible injuries to help build a case of animal abuse against the criminals. Roo is considered evidence and will not be available for adoption until the animal abusers are prosecuted, convicted, and the case is close.

“Roo is a dog who touched everyone she met and we wanted to make sure she got the best care possible,” said Luongo.

She needed immediate medical assistance, and FODA worked with the county to coordinate Roo’s release to a foster home. Her release was approved 10 days after arriving at Dekalb County Animal Services. 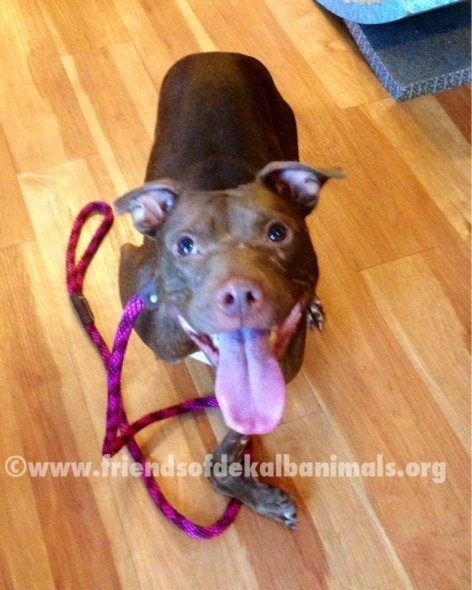 FODA is sponsoring all of Roo’s medical bills thanks in part to a generous donation by Xena the Warrior Puppy’s family who have started “Friends of Dekalb Animals: Xena and Jonny Shelter Fund.”

Chrissy Kaczynski works at the shelter as a rescue coordinator and works to place dogs with FODA. Kaczynski and her husband Aaron Thompson have fostered numerous special needs dogs, rescued from Dekalb County Animal control like Xena. They knew Roo was the next dog they were destined to rescue and help heal.

It is unknown what Roo really went through at the hands of her abusers, but her rescuers believe she was definitely used for breeding and as a bait dog.

Once Roo was taken to veterinarian specialists, her plan for recovery was set in place. The joint in Roo’s left broken leg needed to be fused into the normal position. This will give her better mobility and less of a kangaroo hop.

“As long as all goes well, she will have better mobility and less pain,” Luongo said. “Roo gets around well now, but the bone fusion will make her much more comfortable. If for any reason that does not provide enough support, her other leg will require surgery and a prosthesis.”

Roo’s bone fusion surgery was scheduled for Thursday, Oct. 3, 2013. Veterinarians expected to keep her in the hospital until Saturday or Monday, just to keep a close eye on her leg’s swelling, drainage, and how well she walked on the splint. Yet she was released back to Kaczynski and Thompson the next day. There were no complications and being in her loving foster home is the best place for her to heal.

“Surgery went great,” said Kaczynski. “[Roo] seems to be standing taller and I think she’s still getting used to being able to walk normally. They only worked on her bent foot, correct[ing] it from the curved position to completely straight. We go for a bandage change/recheck Monday. Right now Roo is on restricted activity and 3 medications.”

It is no surprise that while Roo has been in foster care her personality has flourished. She is no longer the dog with a broken spirit, sad eyes, and no smile. She is playful, loving and has started to trust humans again.

“Roo has really come out of her shell with her foster parents,” said Luongo. “We’ve found with new people that sometimes she likes them and sometimes she doesn’t trust them. We have not exposed her to other dogs yet other than in passing.”

For now Roo will heal and learn how to walk on her repaired leg. She will receive unconditional love from her foster parents and all her friends. Roo will be socialized and when the criminal case is closed she will be available for adoption. In spite of her traumatic history, Roo is a sweet and loving girl.

Her ideal home would be fairly quiet and she would be the only pet in the household. Luongo said that due to Roo’s abusive past, FODA does not know if “she will ever be 100 percent reliable with other animals.”

Arrests have been made in regards to this animal abuse case and charges have been pressed.

Friends of Dekalb Animals does not have a shelter. They are an all volunteer-based organization with a network of local foster homes for the 600 plus dogs they rescue each year from Dekalb County Animal Control, a high kill shelter in Georgia.