Petey is not your average mutt. He has overcome enormous hurdles in his journey towards a loving home and is lucky to be alive. The beautiful Siberian Husky mix is completely different than the dog that stepped into Pet Helper’s (http://www.pethelpers.org/) facility in Charleston, South Carolina in early April of this year. 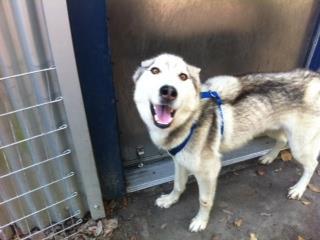 When Petey joined the Pet Helpers family, he weighed only 19 pounds. A normal, healthy Siberian Husky weighs between 45 and 60 pounds, so Petey’s condition was serious! Petey was transported from a high-kill shelter, where he was found emaciated. The dog being kept next to him was not so lucky, having already starved to death.

Petey’s prospects became much more hopeful when Carol Linville, the Founder and President of Pet Helpers chose to rescue him from the shelter. Upon arrival, two veterinarians, Dr. McKim and Dr. Love, gave Petey a complete physical evaluation and he was immediately placed on a diet to help him gain weight.

As Petey began to put on weight and receive better care, his goofy personality also began to emerge. Petey is now a very intelligent dog who loves people of all ages.

On May 19th, approximately five weeks after Petey entered the Pet Helper’s facility as a scared and emaciated shell, a smart and friendly Petey found his forever friend when Nick Black adopted him. On the day that Petey was left with Nick, he weighed 47 pounds, a significant improvement from his arrival!

Petey’s story is not over, as he continues to recover weight and must also undergo treatment for heartworm.  However, Petey is now in a loving home and looks to have a very good future ahead of him!

The facility was founded in 1976 by Carol Linville, the current President, after she read that 8,000 pets were being euthanized each year at local shelters. It began as a weekly ‘adopt a pet’ column but has now grown into a full rescue and adoption facility.