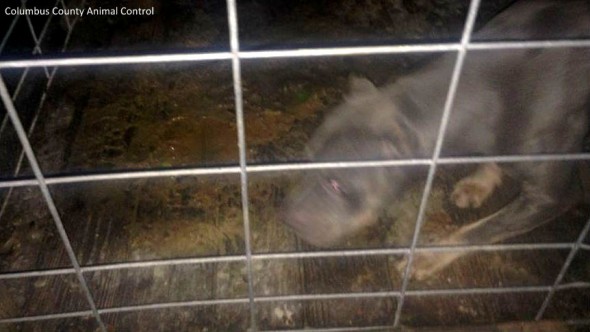 Tropical storms and hurricanes are known for causing death and destruction, but in one North Carolina city, Hermine’s destruction actually saved lives.  A handful of dogs were being kept with in tiny cages with no food, and a broken tree branch changed all that.

In Tabor City, a tree branch broke off and smashed an outdoor dog kennel open during the storm.  One dog escaped, and when neighbors called to complain about him roaming the streets, police found five other caged dogs on the property of an abandoned house from whence this dog came.

Columbus County Animal Control reported that the dogs had only putrid, stagnant water to drink and no food.  They had been so long with nothing to eat that they had resorted to eating their own feces.  Some of the cages were so small the dogs could scarcely turn around.

“There is just no excuse for this type of treatment of animals,” said Animal Shelter Director Joey Prince. “Based on the condition of the dogs’ fur they had been underfed for some time. We intend to prosecute to the fullest extent possible that the law allows. Had these people come to us for help, we would have been glad to assist. However, to just abandon these animals and leave them there without food or clean water is just unconscionable.”

The investigation continues, and now all the dogs are being pampered and having all of their needs met.