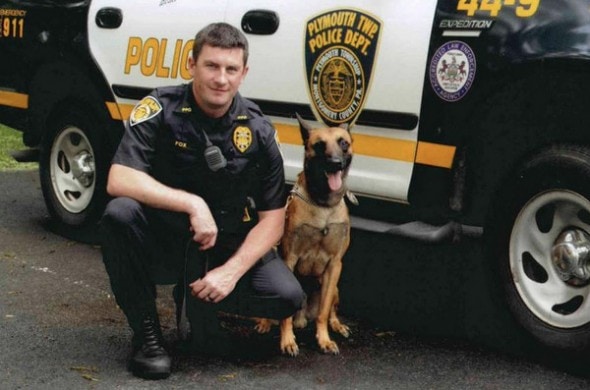 When Plymouth Township police officer Brad Fox was killed in the line of duty in September he left behind his pregnant wife, his young daughter and his K-9 partner Officer Nick. Now Nick has officially been retired so he can spend the rest of his life living with Fox’s widow and children.

Brad Fox and Officer Nick were in pursuit of a hit-and-run driver when they were ambushed. Fox was fatally shot in the head and Nick suffered a flesh wound. Officers rushed to the scene to try and save Fox’s life, but it was too late. The other officers couldn’t save Fox, but they wanted to make sure Nick went home to Fox’s family. “We are trying to make their family as whole as possible, and send him back where he belongs,” said Deputy Chief John Myrsiades. “(Fox and Nick) had just graduated from the Philadelphia Canine Police Academy together. He is just a puppy.”

Nick’s retirement wasn’t a simple task. He was paid for with a grant from the Department of Homeland Security. Officials had to cut through red tape to allow for his retirement so he could go home with the Fox family. While officials worked on getting Nick retired the police did what they could to help Nick and the Fox family. “One of our K-9 officers has been helping the family by keeping the dog and bringing it over to their house, and taking it back and forth to the veterinary hospital where he was being treated for his wound.” Nick has since made a full recovery from the wound he sustained in the ambush.

On Monday all the hard work to retire Nick paid off.  A ceremony was held during Plymouth Township’s Monday night council meeting to officially retire Nick. The council adopted a resolution for the transfer of Nick to Officer Fox’s widow Lynsay. “We’re all a big family, we always have been. Officer Nick is part of our family. Brad and his family are all a part of us,” said Myrsiades. “It makes us feel good to do something for this family.”

Lynsay and her daughter Kadence attended the ceremony. “I’m just glad to have him home officially. It’s a small piece of Brad that we now have home with us personally,” said Lynsay. “He’s where he belongs.”