Over the weekend I was missing my dog Charlee and took a photo trip down memory lane. Through my blur of tears I came across these two gems.

In the two photos below we have Charlee who was about 7 or 8 at the time, and 13 week old Sadie, a client’s puppy, who was visiting for the very first time. Sadie’s family owns several nursing homes, and she grew up to fulfill her role as resident therapy dog. Sadie is still bringing joy to many.

The photo was taken during Sadie’s very first hours in my home. To me it looks like Charlee delivered an important message to the pup. Can you tell what Charlee said? How are your body language reading skills? Can you tell what it was that the two dogs said to each other? 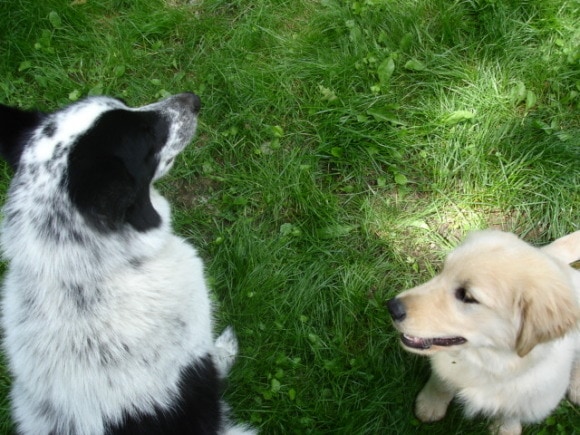 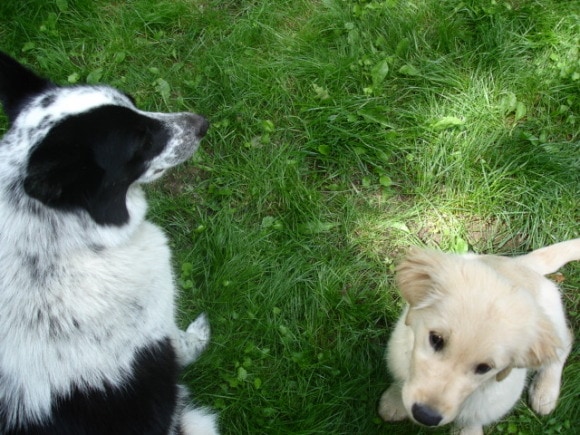 In the first photo, Sadie seems to be saying “oh Hai! Let’s play!!” She didn’t seem to notice that Charlee had her don’t come any closer puppy force field up.

In the second photo, all Charlee had to do was tilt her head and give the puppy a slight stare and the puppy got her message loud and clear. Sadie seems to be saying to Charlee — “Yes Ma’am, I mean no disrespect.”

The two photos were taken within about 2 seconds of each other and I didn’t know what I had until I viewed it later that day. Right after I snapped the shot, Sadie darted off to play with my Collie.

Dog body language is fascinating to those of us who study dog behavior. What I hope many of you take away from this post is that dogs have their own language. You should all be trying to better understand your dogs and strive to be better observers. In the puppy parties that I hold weekly, I can be seen giving blow by blow accounts of the puppy action, to help to educate the humans about what the pups are saying to each other. Puppy parties are not just pig piles of puppy play, but done right they are a great place to learn, for both human and pups.

In her twilight years, Charlee was asked to share her home with a revolving door of adolescent guests. I did my best to keep her safe from pestering pups, and I made sure that she got the R and R that she deserved. Charlee knew that I had her back. It was not Charlee’s job to police the pups. Dogs can become stretched quite thin. Charlee certainly could have easily suffered from what some call the “rubber band effect.” Basically that is when a dog is stretched so thin that they seem to snap for no reason. In reality, the dog , just like some people, just reached their tipping point.

Training clients and foster pups who stay at my home leave with lots of life lessons in canine body language, and acceptable vs unacceptable behavior. Just to reiterate, it is not the older dog’s job to play ref. Puppy policing is the human’s job. At the same time, all puppies should have a dog who rules their life with a fair paw. Those older dogs are often referred to as a “seasoned bitch.” Our Collie Finney plays the role as seasoned bitch just perfect at my house.

For those of you who visit dog parks, stop for a minute and think about all the signals the dogs are getting and giving to each other. Many cues are likely missed at dog parks because the players are all so excited. When ever possible, back your dog up. Step in and protect them!

One last thing, don’t be surprised when the day comes that your once life of the party dog no longer enjoys chaotic dog park type play. I can often be heard telling people the following analogy when they lament to me that their dog no longer likes the dog park: “I used to slam dance in Kenmore Square at the Rathskeller when I was younger.”

My friend Rebecca sent me these two images tonight of her 13 year old dog Aria and their new young room mate Vera Lynn Steed. The photos were taken 3 minutes apart. I would have liked to have seen the exchange between the older dog and younger dog when Aria usurped the better dog bed. 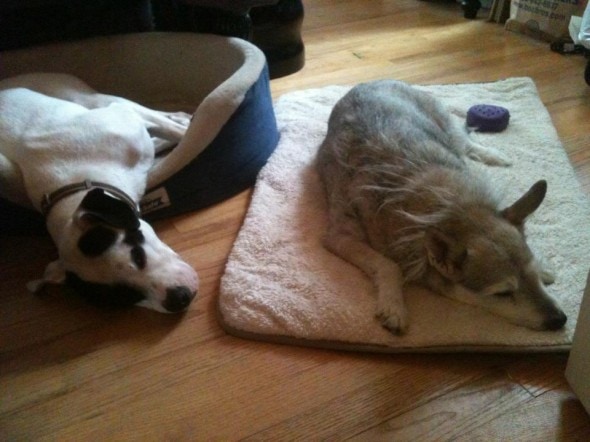 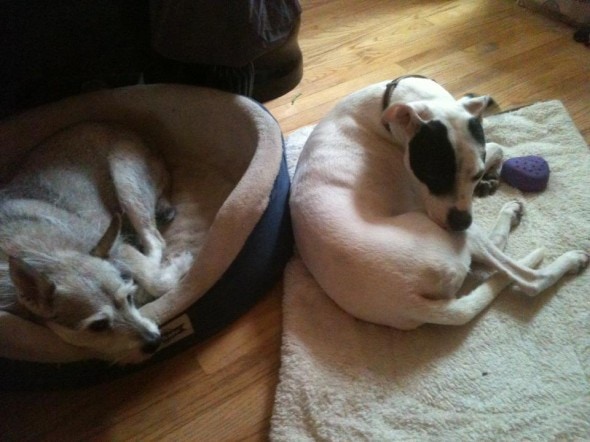 Nancy’s blog is sponsored by the good folks at Doggie Loot. Check out their deal of the day, every day!